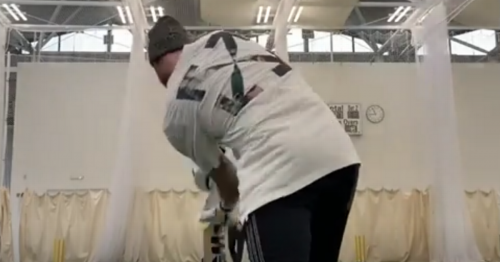 England star Ben Stokes has returned to batting, teasing a potential late Ashes call-up by posting a clip of him training on social media.

Stokes has been out of action since July, with the all-rounder taking an indefinite break from the sport to prioritise his mental health and focus on recovering from a finger injury he sustained in April in the IPL.

After having surgery on the injury, Stokes attempted to make a comeback in the summer and even captained a makeshift England side against Pakistan.

However, he revealed in a column for Mirror Sport that he was in 'ridiculous pain' throughout the series and has not played for England since.

Stokes recently underwent a second surgery on his finger and his recovery certainly seems to be going well.

Earlier this week, Stokes revealed that he had been able to hold a bat properly for the first time in six months.

Now, he has shared a clip of him hitting balls in the nets with England physio Craig de Weymarn on Instagram.

In the caption, Stokes wrote: "It’s casual clothes training on a Thursday… Generally my first ball back and this is what happened

England's head coach Chris Silverwood has left the door open for Stokes to return in time for the Ashes, saying on Sunday: "When Ben is ready, he'll give me a call and then we'll cross that bridge when we come to it, make plans where necessary.

"Ben is moving forward, and the communications I have had with him, he is definitely more upbeat.

"I'll be led by him and my concern first and foremost is his well-being. And when he does come back we'll make sure he's in the right place and he is ready to perform."

England bowler James Anderson has also admitted that it would be "great" if Stokes could feature in the series, but insisted the all-rounder "won't be rushed back".

He said: "I’m not exactly sure where he’s at. That’s something he’s been talking to the guys at the ECB about – the coach and medical team there. I know for a fact he won’t be rushed into anything.

"For us, the squad that we’ve got, that’s who is going to be heading out there on the 4th of November and we’re going to give it our best shot to get the Ashes back.

"And if at some point we do get Ben back then obviously that’s great because he’s a huge player, but I know he certainly won’t be rushed back."

Previous : Mum of Brit jailed for 25 years in Dubai for CBD says ‘no help’ from Foreign Office – World News
Next : Cricket Australia in chaos ahead of Ashes as chairman resigns after states mount revolt