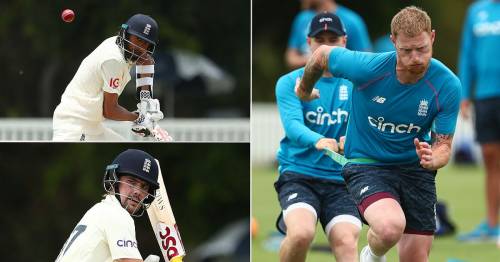 Ben Stokes' highly-anticipated return to England duty has been delayed after the opening day of England'sAshes warm-up match prematurely ended due to rain.

The 30-year-old was scheduled to make his first international appearance since July, when he opted to take a break from sport in order to focus on his mental wellbeing and physical recovery from a fractured finger injury.

Openers Haseeb Hameed and Rory Burns scored 53 and 39 respectively to take England to 98 without loss before play was halted and called off in the second session in Wellington Point.

While technically a lowkey affair, the match looms as a milestone for Stokes as he was set to return for England since taking his break from the game.

Stokes, an all-rounder who plies his trade with Durham, was to bat at number five in his first England appearance since a one-day international clash with Pakistan in July.

The superstar all-rounder, who inspired England's dramatic World Cup win in 2019, was initially left out of England's squad after being forced to have a second bout of surgery on an injured finger.

Stokes was later included to provide a dramatic boost to England's chances down under and is in line to play his first Test since March when the series kicks off.

England captain Joe Root and veteran fast bowler Stuart Broad were included in the team along with Stokes, and were preparing to bat in the three-day game before rain forced the covers on.

Fast bowler Jimmy Anderson warmed up with the squad but the 39-year-old was not named to play in the warm-up match.

How do you fancy England's Ashes chances with Ben Stokes returning? Let us know in the comments section.

Squad members who were involved in England's T20 World Cup run to the semi-finals were not included in the warm-up match.

This includes the likes of Jos Butler and fast bowler Mark Wood, who are set to remain in quarantine for another week.

The first Ashes Test at the Gabba begins on December 8, with the fifth and final Test scheduled for Perth's Optus Stadium on January 14.