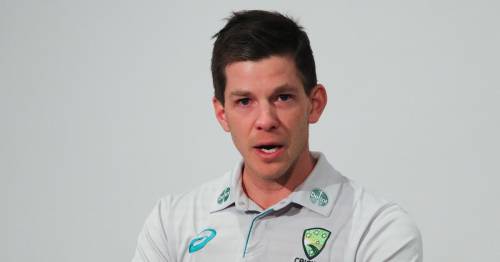 The Australian Test team was ‘shocked’ by the sexting scandal surrounding former captain Tim Paine, according to batter Marcus Harris.

The Australian camp was rocked last week, after Paine resigned from the captaincy role after a host of X-rated messages he had previously sent to an ex-colleague were exposed.

Opening batter Harris has since revealed that he and his teammates were briefed just half-an-hour before Paine went public, during a teary press conference in front of the world’s media.

Discussing the moments when the Australian playing staff found out, Harris said: “People were obviously a bit shocked but we’ve got a lot of good leaders around our group.

“So it’s not ideal but someone’s going to have to step up and lead from the front.”

With just two weeks to go before the opening Ashes Test at the GABBA against old foes England, the Aussies are yet to confirm who the man leading them out onto the famous Brisbane turf will be next month.

Despite Paine’s resignation, Harris believes the wicketkeeper will still play a big role in the decision making and leadership of the team, as Australia look to retain the Ashes for a third straight series this winter.

The opener continued: “Painey will still be around and can still show leadership in many different ways but we’re looking forward to getting into camp and getting on with it.”

With the Tazmanian keeper no longer in the team for his captaincy, many have questioned whether Paine will even be part of the Australian side all together for the opener at the Gabba.

Who do you think will replace Paine as captain? Let us know in the comments section below.

However, teammate Harris believes the former skipper is still more than deserving of a place in the side, especially with the gloves on.

“I think you’d probably still argue that he’s still the best gloveman in the country and he still played a few important innings last summer against India,” added the 29-year-old.

“I know he’s got all the support of the players and like I said, all that other stuff is up to people above me.”

Paine has also backed himself to play a key role within his team this winter, despite no longer being the squad's leading figure.

During his press conference last Friday the Tasmanian wicketkeeper said: "I will remain a committed member of the Australian cricket team, and look forward with anticipation to what is a huge Ashes tour."