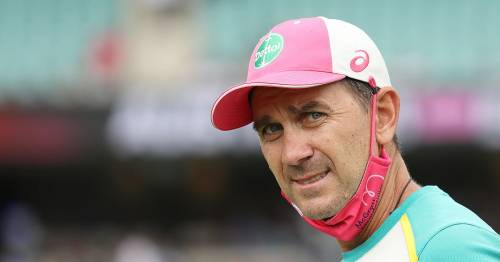 Langer is out of contract in May and, despite leading Australia to success in the Ashes and the T20 World Cup, his deal may not be renewed.

The 51-year-old's 'intense' coaching style has come in for criticism during his reign, with Cricket Australia CEO Nick Hockley forced to back Langer publicly after the coach held 'clear-the-air' talks with players.

Since then, Australia have won the T20 World Cup and retained the Ashes, but both Hockley and Test captain Pat Cummins have been reluctant to address Langer's future.

Australia head coach Justin Langer is out of contract this year
(

"We always said we're going to be really focused on the two upcoming campaigns," Hockley said.

"That's the T20 World Cup and the T20 team did fantastically to bring that trophy home and same for the Ashes.

"I know JL, I know the team, they are very, very focused on this series and what we have said before the summer, we'll be sitting down at the end of the season, to review where we go from there."

Cummins, meanwhile, refused to endorse Langer after Australia went 3-0 up in the Ashes, saying: "I think we’ll savour this victory today and continue the Ashes.

"I don’t think today is the day to speculate on that. We’ll all sit down together after this series or whenever his tenure is up.

"His contract is up for renewal in a few months and we’ll deal with that then."

Now, according to both the Guardian and the Telegraph, Langer is expected to leave his role as Australia coach and Bayliss is a strong contender to replace him.

Bayliss is said to be 'the favoured candidate among the Australia team' and previously worked with captain Cummins and vice-captain Steve Smith during his time in charge of New South Wales.

Having spent four years in charge of England, Bayliss has since taken coaching roles with T20 franchises like IPL outfit Sunrisers Hyderabad and Big Bash side Sydney Thunder.

Speaking to the Sydney Morning Herald in June, Bayliss admitted he would be interested in replacing Langer.

"The only full-time job I’d contemplate in the future if it came up would be the Australian job," he said. "But I’m very happy coaching two or three of the franchise teams around the world."

Previous : James Anderson hits back at Michael Vaughan over claim England should “move on” from him
Next : Geoffrey Boycott insists England need to “move on” from Jos Buttler after the Ashes