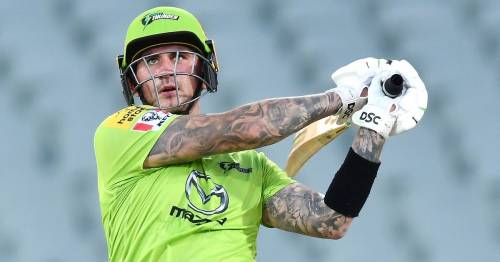 Sydney Thunder have chosen to stick with Alex Hales for the Big Bash League despite racism allegations made against him.

Photographs had emerged of the 32-year-old posing with dark body paint on his face at a party.

Hales has held extensive talks with the Thunder over the revelation, and has apologised for " reckless and foolish behaviour" in relation to the photos.

The England star says they were taken at a fancy dress New Year's Eve party in 2009, and that it was a tribute to iconic rapper Tupac Shakur.

Hales has also been accused of naming his pet dog "Kevin" as a derogatory joke aimed at Azeem Rafiq, but he denies that allegation.

Alex Hales has apologised over blackface photos from 2009
(

After discussing the allegations and the topic of inclusivity with the Thunder, Cricket New South Wales chief executive Lee Germon accepts that Hales has offered "a sincere apology" and that he is "determined to help" in their push to increase inclusivity.

"There is no place in cricket – or society – for racism or discrimination," said Germon.

"One of the hallmarks of Thunder Nation's success is the team embraces diversity, and is a club for all. If we really believe that we also must accept people who have made mistakes.

"I've spoken to Alex, I've watched his apology, and have no doubt he is remorseful for the photograph and the other errors of judgement he made as a young man.

"Alex appreciates that going by today's standards people will question his judgement and actions and he's offered them a sincere apology.

"We want everyone who comes to a Sydney Thunder match to know it is a safe place – one of mutual respect for them and their families. Alex is aware he's in a position where he can drive that, and he's made it clear to me that he is determined to help."

Speaking in Parliament, Azeem Rafiq accused Alex Hales of naming his dog "Kevin" in what he described as a reference to a racial slur directed at him
(

After the accusation involving his dog made by Rafiq, Hales said in a statement: "Having heard the allegations made against me, I categorically and absolutely deny there was any racial connotation in the naming of my dog.

"I entirely respect and have huge sympathy for both the stance Azeem Rafiq has taken and what he has had to endure. His evidence was harrowing.

"There is no place for racism or discrimination of any kind in cricket and I will gladly co-operate with any investigation the game's authorities choose to hold."