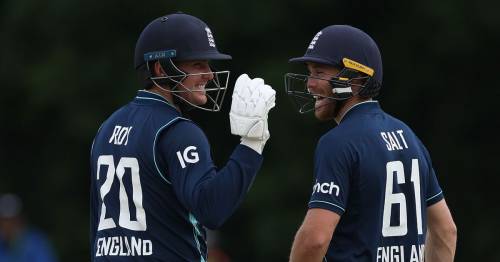 England beat the Netherlands by six wickets in the second ODI at Amstelveen, thanks to twin 70s from openers Jason Roy and Phil Salt.

After deciding to bat first, the hosts made a respectable 235-7 in their innings, with captain Scott Edwards leading an impressive recovery. The Netherlands fell to 39-3 in the first ten overs, before Edwards backed up his 72 in the first match with an excellent 78.

He shared crucial partnerships with Bas de Leede and Teja Nidamanuru, before getting run out by a magnificent direct hit from David Willey. The left-armer was the pick of the seamers for England as he took 2-46, while leg-spinner Adil Rashid was typically effective as he picked up 2-50.

In response, Roy and Salt got England off to a brilliant start and it looked as though the visitors would romp to another dominant victory. Roy made 73 after missing out in the first match, while Salt backed up his ton on Friday with an excellent 77.

However, England did suffer a scare when captain Eoin Morgan fell for his second duck of the series and the dangerous Liam Livingstone was bowled for just four. It was the slow bowlers who made the impact for the Dutch, with 19-year-old Aryan Dutt taking 2-55, part-timer Tom Cooper removing captain Eoin Morgan and debutant Tim Pringle producing a beauty to dismiss Livingstone.

Despite the fightback, England ultimately reached their target with 29 balls remaining as Dawid Malan and Moeen Ali guided them to a six-wicket win.

Jos Buttler made his 150th ODI appearance, while Jason Roy made his 100th
(

It was a landmark game for both Roy and Jos Buttler, who were making their 100th and 150th ODI appearances respectively. The pair have been integral to England's white-ball revolution under Morgan, having both starred in the 2019 Cricket World Cup win.

Moeen presented Roy with his 100th cap, before Morgan presented Buttler with his 150th cap. And Roy in particular had a day to remember after scoring 73, having missed out in the first ODI when he was bowled by cousin Shane Snater.

Buttler, meanwhile, did not even need to bat as England reached their target just four wickets down.

Having been brought into the side in place of Sam Curran, whose appearance in the first ODI was his first in an England shirt in almost a year due to a lower-back stress fracture, the Durham quick made an immediate impact.

The 26-year-old struck with just his second delivery, getting veteran batter Tom Cooper lbw for 17. Carse is very highly rated by England, with Durham teammate Ben Stokes comparing him to Liam Plunkett, who picked up 3-42 in England's World Cup final win.

"He's a seriously-impressive cricketer," Stokes said last year. "He's known for his bowling but he is a genuinely good batsman as well.

"He's got pace, that X factor every team wishes they have and I see him in a similar role to the one Liam Plunkett had in the England team for a number of years."

After his progress was stunted by a knee injury suffered in November, Carse has made an impressive comeback and, with a number of other seamers currently injured, will surely be afforded more chances with England this summer.

Edwards leads from the front

Standing in for usual skipper Pieter Seelar who was sidelined with a back issue, Edwards continued his good form with the bat. The wicketkeeper top-scored for the Dutch in the first ODI with an unbeaten 72 and followed it up with 78 in the second.

Edwards struck seven boundaries in his innings, three sixes and four fours, and shared crucial partnerships with De Leede and Nidamanuru. Ultimately, it took a stunning piece of fielding from Willey to remove him, who ran Edwards out with a direct hit.

After pushing for two, the 25-year-old found himself just millimetres short of his crease after a despairing dive. It was a heartbreaking end to an excellent innings and means Edwards is still waiting for his first ODI hundred.

It is incredibly difficult to break into England's white ball side given the amount of depth they can boast in virtually every position. As a result, when players do get an opportunity they need to make the most of it or else they may not be afforded another one for a while.

With Jonny Bairstow unavailable to open alongside Roy due to his involvement in the ongoing Test series against New Zealand, Salt has been tasked with filling his shoes and has done an excellent job so far.

He scored one of three centuries in the first ODI and followed that up with 77 in the second. With a T20 World Cup later this year and a 50-over when in 2023, Salt is certainly doing his utmost to ensure he is in England's plans.

Morgan falls for another duck

Speaking before the series began, Morgan declared: "If I don't think I am good enough or I don't feel I am contributing to the team, then I will finish." While he remains one of the best captains in world cricket, his contributions with the bat have begun to dwindle.

Since the start of 2021, he has passed 20 just twice in 18 innings across ODI and T20I cricket. And the 35-year-old has been out for nought in both matches in Amstelveen, falling for a seven-ball duck in this game.

As a result, questions about his future remain and, with the likes of Salt, Malan and Livingstone all impressing in the absence of Bairstow, Joe Root and Stokes, Morgan is in desperate need of a significant score.