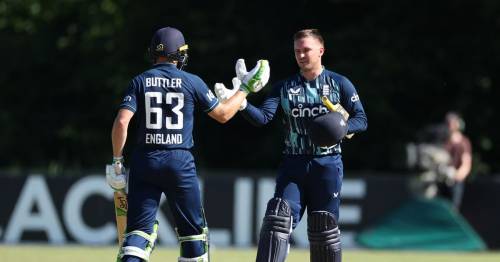 England comfortably beat the Netherlands by eight wickets in the third and final ODI at Amstelveen, thanks to an excellent unbeaten 163-run partnership between Jason Roy and Jos Buttler and an impressive 4-36 from David Willey.

After deciding to bowl first, Willey removed Vikramjit Singh cheaply for the third time in the series. However, the Dutch looked to rebuild, with Max O'Dowd, Bas de Leede and captain Scott Edwards all passing fifty.

The hosts attempted to build a decent platform, but struggled to find the boundary with any regularity and ultimately collapsed at the backend of their innings. De Leede and Scott Edwards shared an 84-run partnership that pushed the Netherlands past 200, but the pair struck just five boundaries between them and just two fours were scored in an 18 over period between the 21st and the 39th.

After De Leede fell in the 39th over, the Netherlands lost seven wickets for just 41 runs as they were bowled out for 244. And England promptly chased down their target with 119 balls remaining after Roy and Buttler showed their class.

However, Roy and Buttler quickly took control of the chase, with Roy finishing unbeaten on 101 and Buttler on 86. It was Roy's tenth century for England and ensured the visitors enjoyed a 3-0 clean sweep in the series.

After Dutch captain Pieter Seelar was forced to retire midway through the series due to a long-term back injury, England skipper Eoin Morgan missed the final ODI with a groin problem. The 35-year-old also struggled with the bat this series after making back-to-back ducks and his fitness and form has become a talking point.

Before the series began, he declared: "If I don't think I am good enough or I don't feel I am contributing to the team, then I will finish." With ODI regulars like Jonny Bairstow, Joe Root and Ben Stokes on Test duty instead, the likes of Phil Salt and Liam Livingstone, who had both played just three ODIS before this series, stepped up.

Salt scored 122, 77 and 49 as an opener, but showed on his T20I debut against the West Indies in January that he can be just as destructive down the order. Livingstone, meanwhile, blasted England's fastest-ever ODI fifty off just 18 balls in the first match and also pitched in with 13 overs of spin.

Given England's depth in the white-ball batting department and the fact Buttler is a ready-made successor as captain, it is impossible not to wonder if the time may be right for Morgan to step away.

Although he may only have picked up the one wicket, Payne acquitted himself well on debut. The left-armer was first named in an England squad back in 2020 after a Covid outbreak forced them to pick an entirely new squad overnight for a three-match ODI series against Pakistan.

Although he did not play in that series, Payne remained in the selectors' thoughts and was picked again for England's T20I series against the West Indies in January. And the 31-year-old has now finally made his England debut, picking up 1-38 from his nine overs.

Having been handed the new ball, he almost picked up his maiden international wicket in just his third over when Tom Cooper top-edged what should have been a simple catch towards short midwicket. However, Livingstone appeared to be blinded by the sun and pulled out of the attempt and Payne had to wait until the final over of his spell to get a wicket as he had Edwards caught for 64.

Having been the unfortunate player who missed out on a spot in England's World Cup winning squad due to a late call-up for Super Over hero Jofra Archer, Willey will be determined to make the squad for their defence next year in India.

With five left-arm options in this England squad alone, Willey is once again facing plenty of competition. However, the 32-year-old will certainly have impressed new coach Matthew Mott so far.

In the first ODI, he was England's most effective seamer, picking up 2-42 from his ten overs. He followed that up with another solid display in the second ODI, taking 2-46 with the ball, a catch and producing the brilliant run-out of Edwards.

But the final ODI was his best performance yet as he took 4-36, ending the series as the leading wicket taker with eight at 15.50. Since his return to the side after the World Cup, Willey has been simply outstanding, taking 25 wickets at 16.64 in nine appearances.

In Roy and Bairstow, England have one of the greatest ODI opening partnerships in the history of the game and, with Bairstow unavailable for this series, Salt undoubtedly had some big shoes to fill.

However, things could not have gone much better for the 25-year-old, who finished the series as the joint leading run scorer alongside Buttler, having made 248 runs at 82.66. He began the series with a stunning hundred as England set a world record total and followed it up with scores of 77 and 49.

Although it seems unlikely he will displace either Roy or Bairstow ahead of the World Cup, Salt looks almost certain to travel to India as the reserve opener and appears to be a ready-made replacement in case one of them is sidelined.

After missing out in the first game when he was bowled for one by his cousin Shane Snater, Roy has been named player of the match in the second and third ODIs.

He scored an impressive 73 off 60 on Sunday and followed that up with a brilliant century on Wednesday. His unbeaten 101 came off 86 balls and was his tenth for England.

Previous : Cricket fraudster Allen Stanford alleges England stars ‘still contact’ him in prison
Next : This could be the coolest summer of the rest of your life