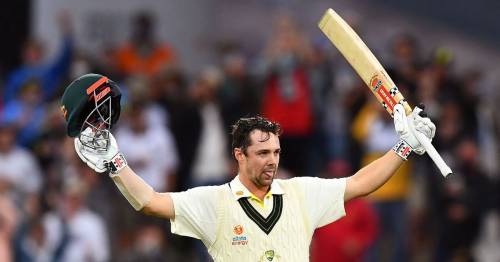 Travis Head scored an outstanding counter-attacking hundred on day one of the fifth Ashes Test between England and Australia, having returned to the side after missing the fourth Test with Covid.

Head batted beautifully and his innings left Australia in a position of strength on 241-6 at the close of play.

Having made five changes to their XI, England captain Joe Root won the toss and decided to bowl first on a green pitch.

England opted for an all-seam attack with Ben Stokes unable to bowl, bringing in Chris Woakes and Ollie Robinson for James Anderson and Jack Leach.

Sam Billings was handed his Test debut in place of the injured Jos Buttler, while Ollie Pope replaced Jonny Bairstow after he failed a fitness test.

Rory Burns also returned to the side, with Haseeb Hameed dropping out after a run of six consecutive single-figure scores.

And England made an excellent start to the Test, with Stuart Broad and Robinson bowling brilliantly up front.

Making use of favourable conditions, the pair reduced Australia to 12-3 after the first ten overs.

Robinson dismissed both David Warner and Steve Smith for nought, getting them caught by Zak Crawley at second slip.

Broad, meanwhile, picked up the wicket of Usman Khawaja for six, with the 35-year-old caught by Joe Root first slip.

Marnus Labuschagne and Travis Head then looked to mount a counter-attack and Woakes and Mark Wood were unable to keep the pressure on.

The pair shared an important 71-run partnership, before Labuschagne was bizarrely bowled round his legs for 44 by Broad.

Head then put on 12 runs with Cameron Green and brought up his second century of the series, becoming the leading run scorer in the process.

The 28-year-old tamely departed for 101, getting a leading edge straight to mid-on, but Green pressed on to make his half-century before falling to a short ball from Wood.

The all-rounder had struggled with the bat early in this series, but he looks to have found some form after back-to-back scores of 74.

Rain then interrupted proceedings and Australia closed on 241-6, with Alex Carey ten not out and Mitchell Star nought not out.

Here are five talking points from the day's play.

In his first ever Ashes series, Robinson has been hugely impressive with the ball in hand and could end the tour as England's leading wicket taker.

The Sussex seamer has taken to Test cricket like a duck to water and, after being recalled for this Test, he picked up figures of 2-24.

With Anderson out of the side, Robinson was tasked with opening the bowling alongside Broad and he picked up two massive early wickets.

The 28-year-old got both Warner and Smith caught at slip for nought and could also have dismissed Labuschagne for a duck, but Crawley put down the chance.

Travis Head celebrates after scoring his second hundred of the series
(

With Australia 12-3 after the first ten overs, Head joined Labuschagne at the crease and the pair decided to take the attack to England.

They brought up their 50 partnership off just 43 balls and propelled Australia to 83-3 off 17 overs.

After Labuschagne was dismissed, Head brought up his half-century off just 53 balls and shared a 121-run partnership with Green to push Australia up to 204.

The 28-year-old ended up making his fourth Test century before getting caught at mid-on for 101 and is now the leading run scorer in the series, despite missing the fourth Test after catching Covid.

After helping Australia rebuild with his key partnership with Head, Labuschagne was remarkably bowled round his legs for 44.

The 27-year-old got into a tangle after shuffling outside off stump and he slipped over before getting bowled by Broad.

"What an extraordinary way to go," former England bowler Steven Finn said on BBC Test Match Special. "It is almost as if Labuschagne's foot slides across the grass.

"He gets himself in a complete tangle. He has been bowled around his legs middle stump. I don't think we will see that again in our lifetime."

Lack of support for Broad and Robinson

After Robinson and Broad were taken out of the attack, Wood and Woakes failed to back them up, with Wood's first spell lasting just three overs and seeing him concede 31 runs.

"This is not a good period of cricket from England," former England bowler Jonathan Agnew said on BBC Test Match Special. "They had the Aussies on the rack. Now they are taking the pressure off."

"Mark Wood has either been too short or too full and Woakes has been too full since he came on," added England spinner Alex Hartley.

During the second session, things went from bad to worse for England as Robinson picked up a back injury.

After bowling an over where he failed to deliver a ball faster than 72mph, Robinson spent some time off the field with stiffness in his lower back.

Despite returning to the field, he did not bowl another over all day, with Root forced to bowl 10 overs of his part-time off-spin before tea.

"Joe Root must think he’s in a bad dream at the moment," ex-Australia batter Simon Katich said on SEN radio. "He won the toss on a green-top.

"He never in his wildest dreams thought he would be bowling [himself] in the first 40 overs. The nightmare continues. You just have to feel sorry for him sometimes."