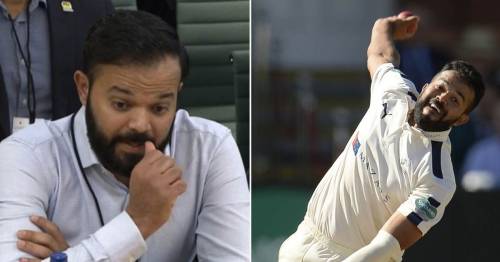 Rafiq – who played for Yorkshire across two spells – has recently accused the cricket club of being institutionally racist, after alleging he suffered continuous abuse during his time with the White Rose.

In the wake of the scandal the disgraced county has set up an independent hotline under the guidance of new chairman Lord Kamlesh Patel.

Mohinderpal Sethi QC has been appointed to lead the process, who has offered support and reassurance to those who intend to use the hotline.

Azeem Rafiq was in tears while speaking about his experiences of racial abuse at the DCMS committee hearing.
(

He said: “I welcome the opportunity to lead this important independent investigation process.

“Those who report their complaints to the whistleblowing hotline should feel reassured that these matters will be addressed in a careful and impartial manner.”

Following his initial report and claims, Rafiq shared his evidence regarding the scandal last week, as he appeared in front of the Digital, Culture, Media and Sport select committee in Westminster.

The 30-year-old’s damning anecdotes included him being pinned to the ground and forced to drink red wine at 15-years-old, as well as being told to sit near the toilets in the team dressing room due to his ethnicity.

Following the recent unfolding of the scandal, Lord Patel has encouraged others who may have been subject to, or witnessed similar experiences to reach out to the hotline service.

The chairman said: “It is essential that those who have experienced or witnessed racism, discrimination and abuse are able to come forward to share their experiences.

“I thank all of those who have contacted the hotline so far.”

Patel also went on to add that whilst change to the ‘systemic issue’ may take considerable time, the 61-year-old said the best way for this to happen is listening to those who have shared their experiences.

He continued: “Lasting and authentic change, particularly in the face of a complex and systemic issue, takes consideration and time, and cannot happen without the voices of those who have suffered.

“Only through committing to listen, and to believe, those who have bravely shared their experiences – and those still to do so – can we truly understand the scale of the issue.”