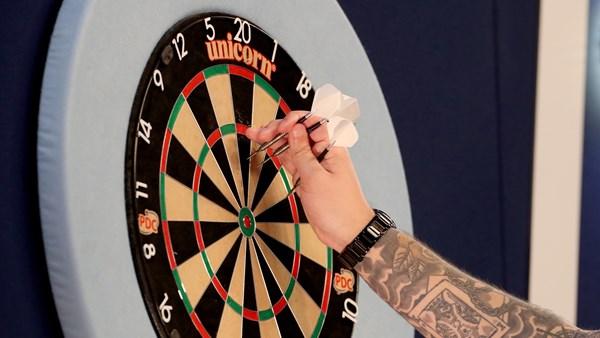 Carl Wilkinson sailed into the next round of the PDC Home Tour with three victories in Group 13.

The world number 89 finished off a perfect night’s work with a 5-2 triumph over Steve Beaton, who bagged two points along with both Callan Rydz and Matt Edgar.

Beaton started the 13th night of the lockdown tournament with a scrappy but comfortable 5-1 victory over Rydz but Wilkinson soon showed his form, averaging 101.6 in a 5-0 whitewash of Edgar.

Wilkinson saw off Rydz 5-3 and found himself clear at the top of the table ahead of the final matches after former BDO world champion Beaton suffered a shock 5-1 defeat against Edgar.

Bedlington’s Rydz beat Edgar 5-2 to get his first win on the board and end Edgar’s hopes of topping the table, leaving Beaton needing to win 5-1 or better to deny Wilkinson the group on leg difference.

Wilkinson finished with a bullseye in a 12-dart finish to take the first leg before Beaton levelled. But the experienced 56-year-old missed double 16 and eight to allow Wilkinson to seal the group before going on to complete the job.

Wilkinson joked: “I’m delighted that I have made three angry men.”

Beaton added: “He killed me on the first leg. I gave it a go, I was fighting a battle.

“My worst game was against Matt Edgar and I have got to live with that for the rest of my life, losing to Matt Edgar! It was all good fun, I enjoyed it and Carl played brilliant.”

Previous : COVID-19 survivor urges: ‘To all of you: Continue to fight’
Next : Man Utd still backing Ole Gunnar Solskjaer to lead the club to glory