Bundesliga given government approval to resume later this month

The German Bundesliga looks set to be the first of Europe’s ‘Big Five’ leagues to resume amid the coronavirus pandemic after the federal government gave the go-ahead on Wednesday.

Clubs in the top two tiers of German football have been back in training since last month with a view to restarting the 2019-20 season in May.

German chancellor Angela Merkel told regional authorities on Wednesday that competition could restart in the second half of May. The 36 clubs will hold a conference call on Thursday to finalise a resumption date.

Christian Seifert, the managing director of the German Football League (DFL) said: “Today’s decision is good news for the Bundesliga and the 2nd Bundesliga.

“It is associated with a great responsibility for the clubs and their employees to implement the medical and organisational requirements in a disciplined manner.

“Games behind closed doors are not an ideal solution for anyone. In a crisis threatening the very existence of some clubs, however, it is the only way to keep the leagues in their current form.

“On this day, I would like to thank the political decision-makers from the federal and state governments for their trust.” 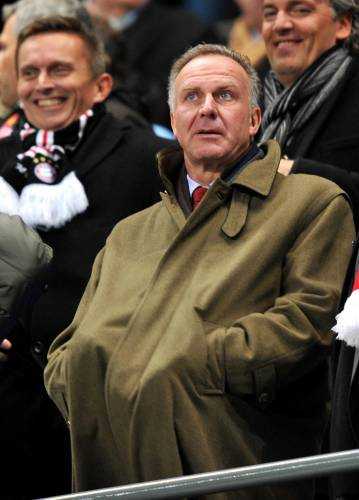 Bayern Munich chief executive Karl-Heinz Rummenigge told his club’s official website: “We are now looking forward to resuming play, ideally from mid-May. This ensures that the sporting decisions are made on the pitch and not in the boardroom.

“I would like to expressly thank the DFL and the medicine task force for the excellent organisational and medical plans. I appeal to everyone involved to follow the guidelines in these plans, which are the basis for resuming play, in an exemplary and disciplined manner.”

Borussia Dortmund chief executive Hans-Joachim Watzke said in a statement on his club’s official website: ““We’re very pleased that the people in Germany – and, from a regional point of view, the people in Dortmund and the surrounding area – have conducted themselves so magnificently in recent weeks that the spread of the pandemic could at least be contained.

“It is only thanks to the incredible discipline on the part of the population that we can now, gradually and in small steps, move on to another form of normality.

“Many industries are now slowly starting up again in compliance with strict rules, and this applies to professional football too.

“In this context, we at Borussia Dortmund are aware we have a great responsibility. We will – in the knowledge there can be no guarantees – do everything in our power to ensure the highest-possible degree of safety in order to prevent any new infections among the players and their families.

“Having to play behind closed doors is an enormous challenge, especially for a club like BVB, which draws a lot of strength from the passion of its supporters. However, it would not have been economically viable for the clubs to allow the Bundesliga to pause until spectators were allowed back into the stadiums.”

German clubs are conducting regular tests on all staff connected to the 36 clubs in the top two divisions.

Earlier this week the German Football League (DFL) said that out of 1,724 tests conducted, 10 individuals had tested positive for coronavirus.

Three of those individuals were connected to second tier side Cologne – with two of their players and a physiotherapist reported to have tested positive. All 10 individuals have been isolated, the DFL said.

Cologne said on Monday that there were no further positive tests in a subsequent round.

The Bundesliga resumption has also been hit by other controversies, with Hertha Berlin’s Salomon Kalou suspended after filming himself flouting social distancing rules.

There has been no action in the Bundesliga since March 8.

Elsewhere in Europe, Belgium has followed France and Holland in officially ending its season.

The Belgian Pro League will hold a meeting about how to end its season on May 15 after the country’s national security council barred any professional football competition taking place in the country before the end of July.

Previous : Uber to lay off 3,700 workers and CEO to waive salary
Next : Restaurant relief group Power of 10 hopes to serve a win-win