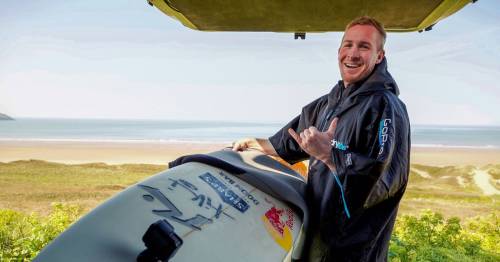 British surfer Andrew Cotton doesn’t want to be remembered as the guy that broke his back, but it’s an incident that instantly gets your attention.

Back in November 2017 the dad-of-two made headlines after fracturing his lower spine while surfing a 55ft wave in Nazare, Portugal.

But for Cotton – or Cotty as he is nicknamed in the surfing world – it was never going to be a wipe-out that defined him. That becomes very apparent in a conversation with the dryrobe ambassador who is living his dream as a professional surfer.

He’s a man who is deeply thoughtful and once worked as a plumber before fully appreciating that his real passion lay in and around the ocean.

While his back fracture may have generated headlines back in 2017, he’s hoping to generate plenty more of his own in future.

“In my mind there was no doubt [about quitting the sport], it wasn’t traumatic enough for me,” he said, referencing his 2017 injury.

“Yes, it was extremely painful but I never at any point thought I was going to drown or die.

“For me, to finish my big wave surfing journey on a fail – I don’t know whether that’s me being egotistical – I don’t want to be about a wipe-out.

“I don’t want to be that guy that fell off or the guy that broke his back.

“There were moments where you go through and think ‘do I really want it?’

“But once you get back on the ocean it answers a lot of questions.”

‘You’ve got to sort your stuff out’

As a teenager Cotty was preoccupied with surfing to such an extent that his teachers reported his obsession to his parents.

For whatever reason there is something about the ocean, and surfing, that just draws the dad from Devon in.

But – as would be understandable for many people dreaming of following their passions – doing it professionally is a completely different ball game.

Sure enough Cotty had to face up to getting a job and ended up turning to plumbing. People need to earn money after all.

“The plumbing chapter was actually really key,” he said.

“It was never my idea. It was more my parents kicking me in the ass and saying ‘you’ve got to sort your stuff out.’

“‘You can’t just be messing around surfing the whole time’.

“It was to get a trade and a skill behind me so I could do something and the dream, maybe, was that I could go to Australia – they’d probably want skilled workers.

“The apprenticeship was three years and then I worked for a local guy in Braunton and then worked for a bigger company that installed solar panels and underfloor heating.

“It was that last job where I was actually earning good money and it was a job for life – one of those where you can get a mortgage and set yourself up for life.

“I was working with guys who absolutely loved plumbing and it was their passion.

“It made me realise I was just doing it because it was expected of me to get a proper job.

“It motivated me to push my surfing and it wasn’t necessarily like ‘I’m going to be a professional surfer now’. It was more ‘what can I do that is within my passion?’”

Cotty touches on a subject that many of us can relate to – how do you know you’re on the right career path, particularly when you’re choosing at such a young age?

“Growing up I found that period – you know when you leave school and go to the careers office – you’re like 15!” he added.

“How can you make a decision about what you want to do then?

“I’m so glad that I didn’t choose those things – and stick with them for the rest of my life because I felt I had to – because society does expect it.

“It’s the pressures and it’s the people who care about you that want you to do well and be successful.”

After ditching plumbing Cotty followed his passion – namely the ocean – to become a lifeguard with the RNLI while also searching for waves closer to home.

But in 2010 he received a call that changed his life from American professional surfer Garrett McNamara.

He had been looking for a safety ski driver and from then on Cotty got to work with him in Nazare. It was the start of a relationship that continues to this day and allowed Cotty to live his dream of being a professional surfer.

“It doesn’t seem real does it?” he said.

“You kind of feel guilty as well, like a bit of a fraud. Everyone can relate that I feel like an impostor, I shouldn’t be doing this and I’m probably not good enough or don’t deserve it. It’s bizarre.

“I still don’t feel that I do belong but there’s moments in the ocean, where everything is connecting, you’re having a good surf and you feel like ‘I want this’.”

At the heart of Cotty’s drive is also a deep feeling that he always wants a little bit more, and that is pushing his surfing career onto new heights.

“Surfing brings me so much happiness but I always want that little bit more you know?

“Whether it’s a bit more out of my performance, or always thinking I can surf better, or could have gone bigger – I’m never totally 100 per cent happy with my surfing.

“I always think I can do better.”

He added: “With surfing you’re chasing that feeling of the first wave, the first wave you catch, when I was probably about seven or eight.

“You can still get those feelings and that same endorphin hit with the waves I surf today.

Cotty is currently starring in 100 Foot Wave, a docuseries following the quest to find the ‘Everest’ of surfing – focusing plenty on Garrett McNamara’s journey and career.

The series is currently airing on Sky and Now TV after premiering initially on HBO in the US.

“It’s about injury and coming back and my story just fits in there I suppose,” said Cotty.

“It appears throughout the series.

“If you really want to do something then you can do it. There will be setbacks but it’s probably surprising what you can overcome.

Andrew Cotton is a brand ambassador of dryrobe, producers of the world’s most advanced change robe. To find out more visit dryrobe.com

Previous : Crews working ‘as fast and as safely as possible’ to repair Cape Breton roads, bridges
Next : Cheapest house in city on sale for just £50,000 – but it may need totally rebuilding