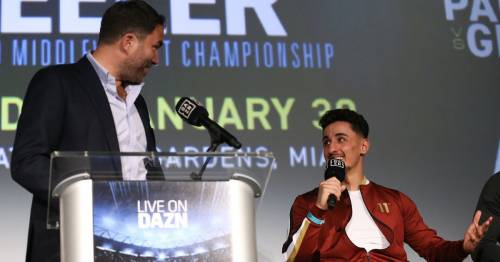 YouTube star AnEsonGib has slammed boxing promoter Eddie Hearn for an 'outrageous' story he told after putting on his fight with Jake Paul last year.

Gib, who returns to the ring for an exhibition bout with TikTok star Tayler Holder this weekend, was stopped in the first round by Paul after being dropped three times in their Miami bout, which constitutes a TKO under Florida State rules.

And after the bout, Hearn claimed in an interview that he had implored the social media star to give up boxing, and even claimed that he told him point blank that he "couldn't fight".

But speaking to Mirror Fighting ahead of his return on 'Social Gloves: Battle of the Platform' on Saturday night, the influencer said that the conversation did not happen the way Hearn claims.

"I saw the interview and he didn't say that!" Gib (real name Ali Al-Fakhri) said. "He did not say that, I couldn't believe when he said that. 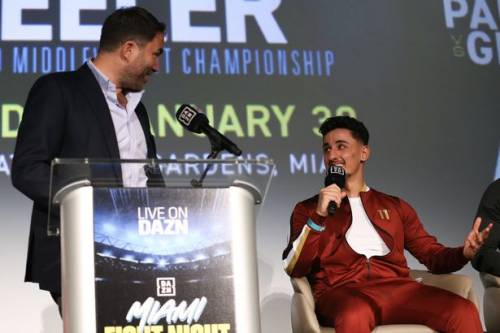 "The real conversation was, he saw me on the lift and he said, "Uou've tried your best, you made some money', I said, 'Thank you for letting me be on the event,' he said, 'You've been a good sport' and that was it.

The YouTube star now turns his attentions to his ring return on Saturday night, live on pay-per-view from the Hard Rock Stadium in Miami.

He faces TikTok star Holder in what will be his fourth fight overall, and his first since taking a humiliating loss to Paul just down the road the Meridian Island Gardens.

And Gib believes he will be returning to the professional ranks after defeating his untested opponent and earning what he calls 'redemption in Miami'.

He and fellow Brit Deji Olatunji have had to take a two-week detour to Mexico with their coaches before they are permitted in to the United States due to travel restrictions, which has come at great financial cost to both men.

For the first time, his corner won't feature British cruiserweight prospect Viddal Riley, but he will retain the services of Muay Thai expert Leon Wills and new coach Abdul Yaseen.

"Everyone that's fighting on this event, or anything else, I'm coming for them, I just need the figures to work.

"I'm not in this for money, but it has to make sense, there's a team and it isn't cheap to bring my trainers out to Cancun so it really has to be right with the figures.

Deji will return to the ring to face Vinnie Hacker at 'Social Gloves: Battle of the Platforms', which takes place at Hard Rock Stadium in Miami Gardens on Saturday, June 12 and will stream on LiveXLive.com.