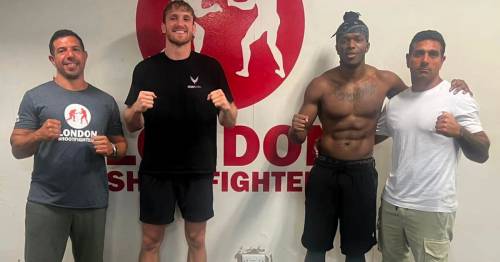 Logan Paul and KSI have been training together after settling their bitter feud as they prepare for their respective ring returns.

KSI, real name JJ Olatunii has been on an intensive training programme at London Shootfighters ahead of his August 27 comeback, while Logan has recently recovered from a broken hand suffered in Germany last summer. And the duo have been spending time together in the UK to launch their energy drink Prime Hydration, which goes on sale next week in Asda.

Paul joined his old rival at the famed MMA gym, which is home to the likes of Michael 'Venom' Page, Darren Stewart and Norbert Novenyi, for a session ahead of launch events for their drink today. The gym shared a photo of the pair after the session, indicating that their workout was "some PPV s***".

The photo shows KSI topless showing off his impressive physique, while Paul wears one of his MAV Athletics t-shirts. They are joined by the gym's head coaches Alexis and Marios Demetriades.

Olatunji is set to face another social media star; believed to be American Alex Wassabi, in the first of two tune-up fights this summer in London, with The O2 arena the prospective venue. He expects to compete in August under his new Misfits Boxing promotion, before taking a second, more challenging, fight around Christmas time.

After getting two fights under his belt this year, the Brit plans to launch a campaign to finally settle his long-standing feud with Logan's younger brother Jake Paul. They almost fought in 2020 on DAZN, but the coronavirus put paid to KSI's boxing career, with the rapper instead focusing entirely on music which has proven a successful endeavour.

Meanwhile, Paul has been recovering from a shattered third metacarpal that he suffered on a boozy night out while celebrating his exhibition bout with Floyd Mayweather. The American YouTube star has been eyeing up future opportunities in the boxing ring, and in recent days began selling NFTs with perks related to his next outing.

Are you excited for KSI and Logan Paul to fight again? Let us know your thoughts in the comments section below!

He has been promoting his 99 Originals collection, where he sells polaroid pictures showing moments from a 99-day period in his life following the Mayweather bout. He went the distance with the boxing legend and celebrated by travelling the world, including Germany where he broke his hand while hitting an arcade punch machine.

It remains to be seen when he will get back to action, with his brother Jake also set to return following a near nine-month absence from the sport. Jake is 5-0 as a professional and has knocked out his four opponents, while KSI is 1-0 and last fought in November 2019 against Logan.

The KSI vs Logan Paul rivalry saw the pair compete in two pay-per-view fights that garnered millions of viewers. Their white collar bout in the summer of 2018 ended in a draw, so they went professional for the rematch which the Brit won by split decision after a heated year-long build-up.