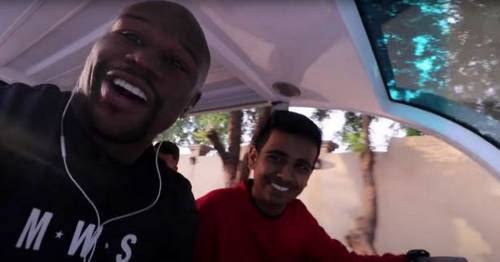 When is Floyd Mayweather vs Money Kicks? Fight date, time and undercard

Ring legend Floyd Mayweather will compete in his third exhibition bout since his professional retirement as he faces YouTube star Money Kicks next month.

Money Kicks – whose real name is Rashed Belhasa – is the son of a billionaire construction mogul, has a massive online following and is one of Dubai's most popular influencers.

Belhasa has never fought in boxing as a professional but competed in two exhibition bouts for the 'Social Knockout' promotion last year.

Since knocking out Conor McGregor in 2017 to go 50-0 and subsequently retiring, Mayweather has competed in two exhibition bouts.

When is Floyd Mayweather vs Money Kicks?

Mayweather's fight with the YouTube star is set to take place on a helipad at the Burj Al Arab Jumeirah hotel in Dubai on February 20, four days before Mayweather's 45th birthday.

Belhasa has insisted it will be a "real fight" and take place over eight rounds.

What time will the fight start?

The main event between the pair will likely take place at 4:00 am in the UK and 20:00 Pacific Time, to suit Mayweather's American fanbase.

If this is the case, the fights will take place at 8:00 am local time in Dubai.

No official undercard has yet been announced for the event, but judging by Mayweather's last exhibition bout it could include celebrities and professional boxers.

So we could certainly be in for another event packed with A-list stars.

What do you make of Floyd Mayweather's fight with Money Kicks? Let us know in the comments section below

Mayweather : "I don't like to call what I'm doing a fight. I like to call it a limited edition boxing showcase. Because it's bigger than just boxing."

Belhasa : "Mayweather is too fast – I need to be close and just go crazy on him! I won't lie to myself. Entering the ring with him is an honour. I will try my best.

"You never know – any punch can land, and I have heavy hands. If he underestimates me? A punch can come. Anything can happen.

"I am much taller than him. I'm getting there. Every day I am learning. I am still young but I'm getting better and better."