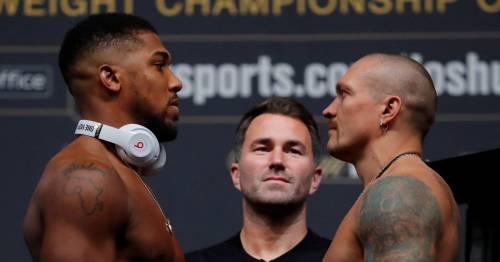 Oleksandr Usyk and Anthony Joshua will come face-to-face for the first time after their heavyweight sequel was confirmed.

Usyk and Joshua will do battle for the second time in Saudi Arabia on August 20 with the latter looking to avenge his defeat to the tricky Ukrainian. Joshua was outpointed at the Tottenham Hotspur Stadium last September after opting to try and outbox his rival who secured comfortable victory after the final bell.

The pair are set to speak out at 3:30pm UK time for the first time since their rematch was confirmed to take place in the Middle East. Joshua and Usyk are then expected to travel to London to hold another press conference on June 29 to meet in front of the British contingent.

A date took longer than expected to be set following Joshua's decision to activate the rematch clause immediately after their maiden duel. Usyk bravely opted to return home and defend his home country Ukraine against Russian invasion so was unable to fulfil the original contracted date in April.

Joshua will be looking to take revenge for the second time in his career having avenged defeat to Andy Ruiz Jr in the exact same location back in 2019. Meanwhile Usyk will be looking to make a first defence of his unified heavyweight titles and cement his name on the pound-for-pound list having previously reigned as undisputed cruiserweight champion.

The British star has made several tweaks to his training team after coming under heavy fire for his tactical approach to his title defence last year. Angel Fernandez was promoted to a head coaching role in place of Robert McCracken who was heavily criticised for his advice in Joshua's corner last year.

Who do you think will win – Anthony Joshua or Oleksandr Usyk? Let us know in the comments section below

He has also drafted in experienced trainer Robert Garcia to help with preparations for the second meeting, with the American making the trip to work at Joshua's new Loughborough University base. Joshua believes, with the help of Garcia and Fernandez, that he will work to a strict gameplan for the first time in his career.

"If I'm honest with you, this is the first time in my career I'd say we are specifically working to a game plan," Joshua said during a Q&A with the Oxford Union. "So it will all make sense after July 23. I've based a lot of my success on raw ability, with the right coaches, experienced coaches. But they probably knew I had ability. So, it's just about neutering that ability. What tends to happen is, we overthink things too much when there isn't a game plan.

"Because things don't always go our way when it's based on raw ability. "So I believe when I start looking at social media now, you're seeing so many different aspects of training and stuff. So raw ability wasn't enough, so now I'm gonna try out this new game plan training and see how it goes."