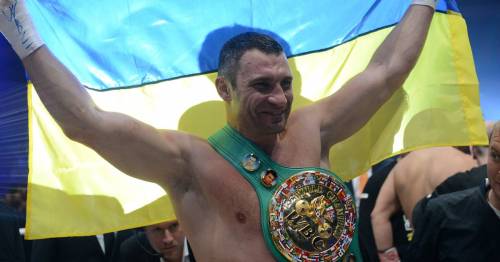 Former heavyweight world champion turned politician Vitali Klitschko has insisted he would fight on the frontline to defend his native Ukraine from a Russian invasion.

Klitschko became the Mayor of Ukraine's capital – Kyiv – the year after he retired from boxing and has remained in the position ever since.

Tensions at the border between Russia and Ukraine are at an all-time high in recent years and this has been escalated with NATO's support for Ukraine.

Klitschko believes Russian President Vladimir Putin wants to rebuild the Soviet Union, but the Kyiv Mayor has other ideas for Ukraine.

"Our eastern neighbour is very unhappy with our decision to be part of our European family, to be European country," he told Channel 4 News.

"We don't want to be back to USSR, we was in USSR and we see our future as part of European family. Mr Putin not agree with that.

"They have idea to rebuild Soviet Empire, we don't want [to go] back to the USSR. We see our future as [a] modern, democratic country.

"As a former officer, I spent a lot of time in ex-military. As a former soldier, I am ready to defend my country, to defend independence of the territorial integrity of Ukraine."

And when asked if he would fight on the frontline, Klitschko added without hesitation: "Yes of course, yes."

Klitschko and his brother Wladimir were two of the most dominant heavyweights in boxing, with their years of success often referred to as the 'Klitschko era'.

Vitali is the only heavyweight in history to win world titles in three different decades, defending his WBC title nine times before retiring at the age of 41.

Wladimir went unbeaten for 11 years winning over 20 consecutive fights during that run, but retired from the sport in 2017 after back-to-back losses against Tyson Fury and Anthony Joshua.

What are your thoughts on Vitali Klitschko's comments? Let us know in the comments section below

100,000 soldiers have gathered at the Eastern border of Ukraine, something that has left Klitschko "worried."

And he claimed over 10,000 Ukrainians have died defending their country in recent years whilst requesting "stability" for the nation.

"We have to defend our country and we need stability. Nobody doubts what happened in east of Ukraine, in last couple years more than 13,000 Ukrainians died," he told CNN.

"Without weapons delivering to this region, without financial support, without propaganda, this conflict will never, ever happen. Everything happens under control of [the] Russian Federation."

Klitschko is serving his second stint as the Mayor of Kyiv after winning the 2020 elections by almost 300,000 votes.