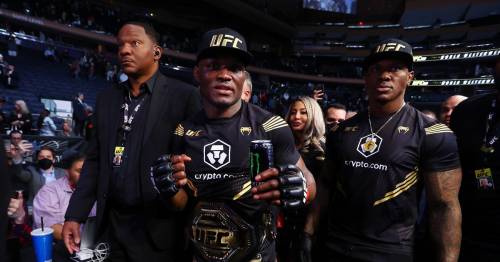 Kamaru Usman has continued his pursuit of a fight with boxing star Canelo Alvarez by predicting a war if the pair meet in a crossover bout.

The Nigerian has just asserted his status as the UFC's leading pound-for-pound fighter after an explosive rematch victory over bitter rival Colby Covington.

And he has frequently called for a crossover bout with Alvarez in recent weeks as he looks to secure a more lucrative reward for his fighting excellence.

But the welterweight champion has now increased pressure on the Mexican to meet in the boxing ring and made his prediction for the spectacle that could unfold.

"I expect a war each and every time I step in there," Usman told TMZ Sports. "Whether it's a cage or it's a ring, I expect a war, you know.

"We as MMA fighters are the one who is courageous enough to step into the boxing ring. But how often does someone get to test themselves against the leading athlete in another sport?

"He [Canelo Alvarez] is an amazing fighter and I take nothing away from him. If it happens, it happens. If not, it is what it is. Payday, payday for both."

The pair have exchanged since Usman's initial offer to Alvarez for a crossover bout a few weeks ago.

When questioned on the offer before his undisputed tilt with Caleb Plant, Alvarez delivered a brutal response to the offer labelling it as a "payday" grab.

But the 'Nigerian Nightmare' has used the significant incentive of financial reward as his motivation to pursue the bout with boxing's leading star.

Alvarez himself has just become undisputed champion at 168lbs after rallying to a late stoppage against IBF champion Plant, to make history as the first champion to unify all four belts at super-middleweight.

Will Canelo Alvarez ever opt to face Kamaru Usman? Let us know in the comments section below

And he had a phenomenally quick journey to conquer the division within 12 months picking up victories against the likes of Callum Smith and Billy Joe Saunders along the way.

However it looks as though the 31-year-old's next test will come in a remarkable 30-pound step-up in weight at cruiserweight against Ilunga Makabu.

The fight would represent Canelo's latest test after fighting four times within a calendar year as his remarkable activity continues.

And former world champion Carl Frampton believes his activity sends a positive message to champions in other weight classes regarding their level of ring activity.

It just doesn’t happen in this day and age,” Frampton said when asked about Canelo’s activity. “He is someone who just stays in the gym and gets back in there after each fight, it is great to see really.

“It is great to see a champion like that who is prepared to fight so often, I watched something that he has started to take up golf which takes his mind off boxing which is normally 24/7.

“I believe it is a wake-up call to other champions that four fights a year is possible and a good number. I liked to have breaks between fights where I didn’t do anything but he is a different type of fighter and he just loves the sport."