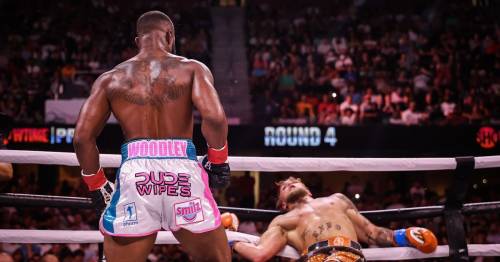 Colby Covington has reiterated his claim that Jake Paul fixed his fight with Tyron Woodley in which he recorded a split-decision victory.

Paul defeated Woodley in his home town Cleveland in August to set up his next showdown with Tommy Fury which will take place in Florida next month.

But he did not have the contest all his own way being smashed into the ropes by Woodley's heavy hands in the fourth round.

And Covington has accused Paul of paying off his opponents – something the YouTube star has vehemently denied.

"That was definitely a work, without a doubt," Covington told MMA News. "You know Tyron Woodley was paid to hold back and not go off on 'snake' Paul.

"He [Woodley] had him hurt and concussed bad in the fourth [round]. Literally, almost fell out of the ring. And he kind of just held him up. He didn't try and finish him right there.

"So you could tell that Tyron Woodley was paid to take a dive and it was a work. So not really much you can think about him at work when someone has a bunch of money from YouTube and Disney.

"He [Paul] can pay people off and that is what he did."

Paul has also been accused of entering clauses into fight contracts, including a "no knockout" rule.

"It's a bunch of losers trying to make s*** up," Paul said when asked about the allegations.

"They want to get into headlines and get reporters to ask them about that exact question and put their name into the mix so that they can get a little bit of clout.

"Having a no knockout clause in a contract, I've never heard of that, and first of all that's highly illegal.

Will Jake Paul defeat Tommy Fury in December? Let us know your verdict in the comments section below

"I'd be in jail! That's rigging a fight, I would literally be in prison if that were actually a real thing.

"It's all nonsense, bulls*** and they got exactly what they wanted out of it which is to have people mention their name."

The allegations fuelled a war of words between Paul and Fury during the press conference for their fight on December 18 in Florida.

The pair will meet in a sanctioned professional bout at a catchweight of 192lb with the contest set for eight rounds.

Fury responded to the "rigging" claims during their exchange yesterday admitting that his rival will be unable to secure a win as he is not paying him.

"I'm not a UFC fighter, I'm not a basketball player and I'm not a YouTuber; I've been doing this all my life.

"When he jumps through those ropes and gets hit by a nice sharp jab in that jaw of his, he's going to be asking what he's signed himself up for.

"This is easy for money; thank God he took the fight because I'm going to rob the bank and not go to jail."

Previous : Where and when Storm Arwen will hit revealed as UK braces for snow and 75mph winds
Next : Jake Paul and Tommy Fury offer different accounts of after-party row