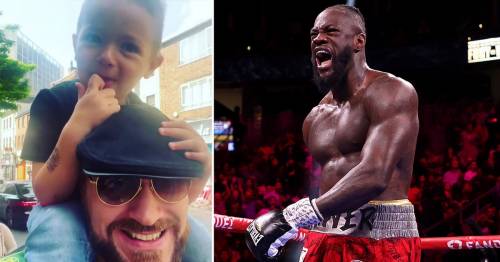 Tyson Fury's six-year-old son Adonis has been filmed hilariously telling his dad he wants to be like Deontay Wilder when he grows up.

Heavyweight world champion Fury won his title from Wilder in their rematch in 2020 before successfully defending it against the American in their trilogy bout last year. Fury went on to stop Dillian Whyte at Wembley last month before announcing his plan to retire from the ring.

And in a video posted to his Instagram page, Fury asks his son what his name is, and then hold old he is. He then asks Adonis what he wants to when he grows up, to which he answers: "A boxer". Fury then asks which boxer he wants to be like and Adonis says, "Deontay Wilder". Fury responds by saying, "No way… he's a dosser!"

Fury and wife Paris have six children together with former world champion Carl Froch claiming the couple are expecting a seventh later this year. Fury plans to spend his retirement with his family and insists he has no interest stepping back into the ring.

"This is the truth, the gospel truth, nothing but the truth – I'm done," Fury told Piers Morgan. "Every good dog has its day and like the great Roman leader said, there will always be somebody else to fight. When is enough enough? I'm happy, I'm healthy, I've still got my brains and I can still talk. I've got a beautiful wife, six kids, I've got umpteen belts, plenty of money, success, fame, glory – what more am I doing it for?

Will Tyson Fury fight again? Let us know in the comments section below

"Boxing is a very dangerous sport. You can be taken out with one punch as we've seen on Saturday and it's one unlucky blow and you may not get up off that canvas. I'm quitting while I'm ahead, I'm undefeated and only the second man in history to retire as undefeated heavyweight champion. I'm very, very happy, very content in my heart with what I've done and what I've achieved."

Fury insists he will not be tempted into a comeback against the winner of Anthony Joshua's rematch with Oleksandr Usyk which is pencilled in for July 23 in Saudi Arabia. Such a fight would crown the first undisputed heavyweight world champion since Lennox Lewis in 1999.

Previous : Boxing fans fear Oleksandr Usyk would “destroy” Canelo Alvarez after defeat
Next : Vladimir Putin vows ‘victory will be ours’ as he prepares for huge parade – World News