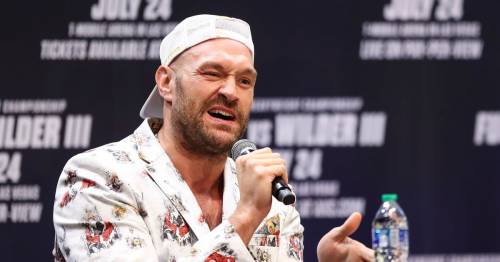 Tyson Fury has issued a sarcastic response to Anthony Joshua after he accused Fury of backing out of their fight earlier this year.

British rivals Fury and Joshua signed contracts to meet on August 14 in Saudi Arabia with all four heavyweight world titles up for grabs.

But Deontay Wilder secured the ruling of an arbitration judge to force a trilogy fight with Fury and the highly-anticipated unification bout was scrapped.

Joshua has mocked Fury for pulling out of the fight, whilst Fury claims Joshua and his team were aware of the arbitration case posing a threat to the fight.

And Fury gave a sarcastic response to Joshua's claims that he is "scared" of fighting him.

Fury is unsure if he will ever fight Joshua
(

He told ' The Overlap ': "Yeah, I backed out and I admit it. I'm scared of him. I fought the best men in the world in their prime and beat them, but I'm scared of this plum.

"I'm going to call him a chicken nugget, just because he's ripped and he's in good shape and I'm jealous."

Fury admitted that he does have respect for Joshua despite their rivalry and that 'AJ' has recently been taunting him on social media.

He continued: "We used to phone each other on FaceTime and all that. While I was in America recently, he was Instagramming me voice messages and that. 'I'm gonna smash your face in' and this and that.

Fury will meet Wilder two weeks later in Las Vegas when they fight on October 9.

And although Fury isn't confident a fight between him and Joshua will ever take place, 'AJ' thinks the sport needs the fight to happen.

He told the BBC 5 Live Boxing podcast : "Do I need Tyson Fury on my record? I need it. We need it for boxing. It's what we all need, I need it. Come on, let's see how good I am.

"Fight good fighters and they bring out the best of you, training camp is hard. To get better is very difficult in boxing. To fight Tyson Fury is a big challenge.

"Let's see how far I can take myself during this period. It'll be a good challenge mentally. Not about him, but because I actually want to do well.

"When I wake up in the morning early and I'm tired, my body's battered, I still go out and do what I do. It's great rewards and only someone like Fury can give that to me."

Previous : Tyron Woodley insists he wasn’t drug tested for Jake Paul fight despite negative result
Next : Five factors that could plunge England back into Covid clampdown this winter