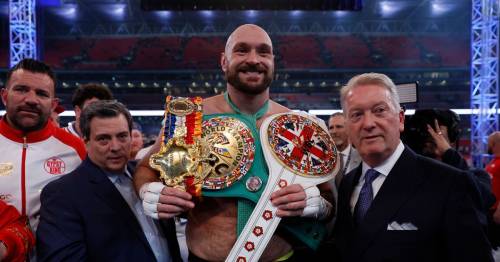 Tyson Fury's promoter Frank Warren has not heard anything about the heavyweight champion being denied entry to the US.

Reports emerged from the Sunday World that Fury had been 'prevented from flying' to the US from the UK by immigration officials. The news broke just weeks after boxing advisor Daniel Kinahan was sanctioned by the US Treasury who named him as a prominent figure in the Kinahan organised crime group.

Warren has confirmed Fury was in Liverpool to watch his cousin Nathan Gorman fight and hasn't been able to talk to Fury about the allegations. “I don’t know.” Warren told talkSPORT'S Fight Night show when asked about the claims. “What I read was that he went to an airport and was refused to get on. Mirror Sport have contacted Fury's representatives for comment.

“As far as I understand, he didn’t go to any airport yesterday and was in Liverpool to see his cousin [Nathan Gorman] fight. I haven’t spoken to him today [Saturday]. That’s news to me.” Fury has an alleged association with Kinahan from his boxing career and previously "shouted out" the advisor with playing a role in his two-fight deal with Anthony Joshua agreed in 2020.

Fury was ringside to support cousin Gorman pick up victory in his heavyweight return which was staged in Liverpool, before documenting himself exercising in his Lancashire home on the following morning. Kinahan was recently sanctioned by the US and is understood to have a £4 million bounty alongside other associates.

His boxing promotion company MTK Global were hit with sanctions worldwide after the Treasury ruling, which saw them later cease operations. Fury was questioned about his alleged connections to Kinahan before his recent victory over Dillian Whyte but opted to play them down and focus on his heavyweight career.

Do you think Tyson Fury will retire from boxing? Let us know in the comments section below

"That's none of my business and I don't interfere with anybody else's business," he said at the time. "But I do know what the media can do. Remember, I was the one witch-hunted a few years back. What a man does in his own business is none of my concern, I am a boxing man, I don’t get involved in anyone’s business at all. I don’t care what you’ve done, I’m only concerned in what I do, and I don’t do anything apart from box. End of.”

Fury's promoter Bob Arum previously confirmed that the heavyweight champion had ended his working relations with Kinahan in 2020 and would handle negotiations for his fights themselves. "Over the weekend I've had a lot of conversations with Tyson Fury and what we both decided is that myself, Top Rank and Fury will do all negotiations for fights in the future," Arum told The Telegraph two years ago.

"This will eliminate a lot of confusion. We've talked with Dan and he understands that it's best the negotiations on Tyson's side be handled that way. Both Tyson and I have discussed this with Dan and he is amenable and satisfied and wished us luck."