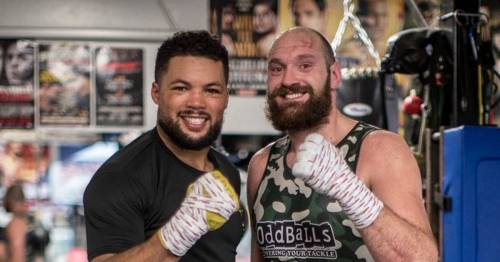 Tyson Fury's promoter wants the heavyweight champion to fight Joe Joyce despite claiming he would only return to the ring for £500 million.

The 'Gypsy King' declared his retirement after knocking out Dillian Whyte in a record- breaking event at Wembley Stadium back in April. However he since hinted that he could return to the ring to face the winner of Anthony Joshua's rematch against Oleksandr Usyk, before later declaring it would take £500 million to see him back in the ring professionally.

“I think if Joe Joyce wins his fight [against Christian Hammer] in early July, Tyson Fury and Joyce at Wembley in early at the beginning of October will do as well if not better than the Dillian Whyte fight with Tyson Fury. That will lead to a Fury fight against the winner of Joshua and Usyk. I’ll do the best I can to make sure that fight takes place in the UK because I don’t think it’s good for boxing to have a fight like that and putting it in Saudi Arabia.

"I think you make more money doing it that way, but I don’t think it’s right for the fans. Boxing is a sport that depends on the enthusiasm of the fans, and you would never think of taking the Super Bowl and moving it to Saudi Arabia, no matter what the Saudis are willing to pay. In the short term, it might be advantageous to go to Saudi Arabia to grab the money, but long term, it’s not good for the sport."

Joyce is expected to face Hammer this summer having previously been set to meet Fury's sparring partner Joseph Parker before fight talks collapsed. Meanwhile Fury will likely wait before making any final decision on his retirement with the winner of Joshua's sequel against Usyk likely to set up a shot at the undisputed crown.

Who would win if the pair fought – Tyson Fury or Joe Joyce? Let us know in the comments section below

The 'Gypsy King' has claimed he only plans to return in exhibition format and has even told Piers Morgan he will give him £1 million if he steps beyond the ropes again. Joyce believes he is the only man left who can beat Fury and also wants to step in the ring with Joshua.

Joyce told The Sun : "I agree with [Fury] on one thing: none of the others stand a chance against him. I am the only one that can beat him if he ever took the challenge. If by some miracle Joshua beats Usyk, he will have to face me or vacate the belt. His chin has gone and I don't think his heart is fully in the game any more."

Previous : Police search for missing girl, 12, as they appeal for information from the public
Next : Anthony Joshua vs Oleksandr Usyk rematch date and venue announced