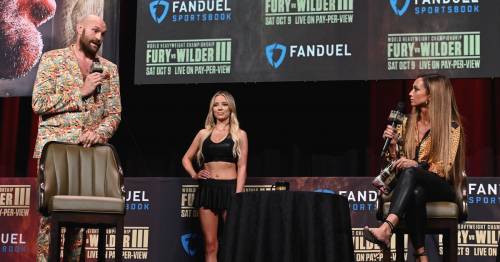 The Top Ranking boss was wound up following the pre-fight press conference between Fury and Deontay Wilder on Wednesday after a mix-up almost saw Abdo organise an impromptu face-off between the fighters.

Fury and Wilder had just spent 30 minutes hurling abuse at one another ahead of a trilogy fight marred in controversy, and both teams had agreed there would be no staredown over fears of a physical altercation.

But Abdo was instructed by producers in her ear to call for the pair to go face-to-face, which incensed Arum, who felt the fight could be jeopardised.

He later launched a foul-mouthed tirade at Abdo, where he accused her of being biased towards Wilder at the event, and punctuated his outburst with "f*** her".

But he has apologised, telling iFL TV that he has a lot of respect for the presenter, and feels she did a great job throughout fight week, where she hosted the fight's US broadcast.

"As far as Kate is concerned, I was completely wrong," he said. "We had made a deal with the FOX producer that was televising the event and the deal was made on behalf of Top Rank and PBC.

"And the producer agreed; no stare-down.

"When she called for a stare-down, particularly after seeing the animosity verbally at that press conference, I exploded but it wasn't her fault.

"The producer reneged and she gets the instructions in her earpiece and she was told to order the stare-down.

"She is a terrific commentator, terrific reporter and she wasn't the one to whom I should have directed my ire, so I was completely wrong."

Arum's rant also saw him hurl abuse at ESPN journalist Mike Coppinger, who had made a comment during the scrum interview about how Top Rank had allowed Teofimo Lopez's unified world lightweight title defence against George Kambosos to go to purse bids.

But Arum was less willing to apologise for that abusive outburst, saying that he felt Coppinger's handling of the situation was inappropriate.

The incident saw Arum order that Coppinger be removed from the interview, which he was by Top Rank officials.

Who should Tyson Fury fight next after defeating Deontay Wilder? Let us know in the comments section!

"I wasn't wrong with Coppinger, but with Kate I was completely wrong," Arum exclaimed.

Abdo had voiced her displeasure at Arum's rant after it took place, but kept her composure as she chaired the Fox Sports broadcast of the fight night.

She wrote in a social media statement after the incident: "With regards to the face-off – I was doing what we the broadcaster believed was agreed on.

"But I think that's kind of unimportant now "I have nothing but respect for Bob Arum and the empire he has created. I understand what he means to boxing and what this sport owes him.

"I think the language in this interview was entirely inappropriate. Of course, it’s disappointing to be disrespected by someone I respect.

"But that’s life, not everyone will give you the courtesy you deserve."

Arum reportedly apologised to Abdo in person after his outburst in Las Vegas.