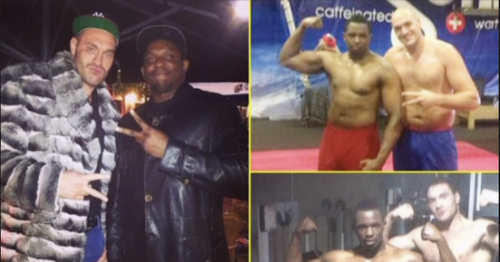 Tyson Fury has continued his back-and-forth with domestic rival Dillian Whyte by posting several old photos of the pair in each other's company.

The Brit uploaded the pictures of him and Whyte along with the caption: "Funny how people treat you when you are good to them, worlds gone mad."

Fury is expected to be ordered to face Whyte in a mandatory defence of his WBC title in the next few weeks.

The WBC delayed their decision to rule the fight last week due to an ongoing legal battle between Whyte and the organisation.

Whyte – who currently holds the interim WBC title – fears he will miss out on a fight with Fury after he pondered retirement following his win against Deontay Wilder last month.

And Fury said he's been left in the dark due to Whyte's ongoing arbitration with the WBC.

"I thought I was going to be fighting Dillian Whyte. I don’t know what he’s doing in his private life with the WBC," he told iFL TV.

"He's got a court case going on, which is kind of s***** really because I know how long arbitrations go on for. I hope I don’t have to fight somebody else like a voluntary or whatever.

"Whatever's gonna happen, will happen. I don't care because they’re all only workouts to me, I’ll destroy every man that comes in front of me, as I've been doing all my life.

"I'm not interested in waiting for other people. I'll be fighting in February or early March at the latest and I'll be defending my WBC championship."

Fury has threatened to "sack" promoters Bob Arum and Frank Warren and start his own promotional company if he doesn't fight by the beginning of March.

Arum and Warren have pushed for Anthony Joshua to step aside from his rematch with Oleksandr Usyk to set up a unification fight between Fury and the Ukrainian.

Usyk won Joshua's heavyweight titles in September when he outpointed the Brit in London.

Should Tyson Fury fight Dillian Whyte next? Let us know your thoughts in the comments section below

Fury – who won the WBC title last February – is keen to fight the former unified cruiserweight champion Usyk if his clash with Whyte falls through.

"I’m due an easy fight anyway, he [Dillian Whyte] would have been ideal really. Heavy bag on legs is what I’m after to be honest. He’d have been the ideal candidate," he added.

"I'm sure that he's got his own legal situations going on and he'll need to sort that out first.

"I'll take the little cruiserweight guy [Usyk], I'll show you how to give a little small man a good hiding. I'll run him over. He’ll look like he’s been run over by an 18-wheeler, just like Deontay Wilder.

"But I'll reverse back over him and run him over again. Too small."

Previous : Shawn Porter forgives his dad for post-fight comments after Terence Crawford defeat
Next : Wisconsin parade driver who ploughed into crowd killing 5 was ‘fleeing another crime’