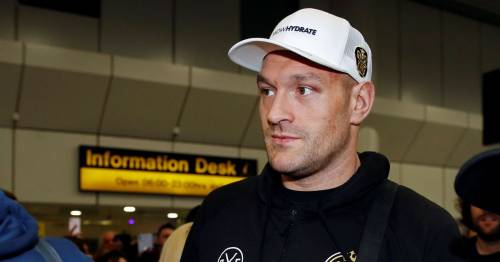 Tyson Fury's father John has seemingly confirmed that the heavyweight champion is banned from travelling to the US.

The 'Gypsy King' has grown a huge part of his career across the pond fighting Deontay Wilder in a epic trilogy which raised his profile on American soil. However reports from the Sunday World recently alleged that Fury had been 'prevented from flying' to the US from the UK by immigration officials.

News of the alleged ban came just weeks after boxing advisor Daniel Kinahan was sanctioned by the US Treasury who named him as a prominent figure in the Kinahan organised crime group. Fury's father John has now called for YouTube fighter Jake Paul to move his September meeting with his son Tommy to accommodate for the heavyweight's recent ban.

And in a deleted Instagram video later posted online speaking about Tommy's potential fight with Paul on August 6, Fury Sr addressed the fact many of them are suspended from entering the US and admitted: "Tyson can't get over there".

"You can have the fight on August 6 but it has got to be not in America because all of us at the minute are suspended and banned for life I can't get there at all," Fury Sr said. "Tyson can't get over there because he has a few issues at the moment that he is trying to sort out. So Tommy has got no team.

"Listen if you want to negotiate a different price we will take less money to fight you anywhere else in the world on August 6. If you can't do it there is not a problem we will get you again. But this needs to be promoted properly and at the minute it's a poor job. If you are interested that is it. We are fighting people you do what you have got to do, contact us and it is game on."

Fury was ringside in Liverpool to watch his cousin Nathan Gorman claim heavyweight victory over the weekend before self-documenting a run near his home in Lancashire. Kinahan is understood to have a bounty of $4 million set by the US Treasury following the announced sanctions.

His boxing promotion company MTK Global were also penalised heavily by the sanctions and were forced to cease operations following the announcement. Fury has been questioned by media regarding his alleged connections to Kinahan in the past but downplayed them and wished to focus on his upcoming fight.

"That's none of my business and I don't interfere with anybody else's business," he said at the time. "But I do know what the media can do. Remember, I was the one witch-hunted a few years back. What a man does in his own business is none of my concern, I am a boxing man, I don’t get involved in anyone’s business at all. I don’t care what you’ve done, I’m only concerned in what I do, and I don’t do anything apart from box. End of.”

Previous : Julius Francis prefers Mike Tyson rematch over Jake Paul fight after viral KO video
Next : ‘I was born in a caravan and now I’m UK’s richest gypsy set to become a BILLIONAIRE’