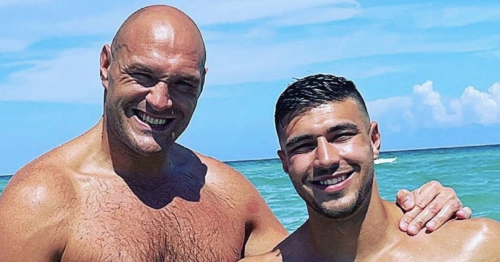 The world heavyweight champion is reported to be unable to travel to America due to connections with Daniel Kinahan, who is understood to be the leader of the Kinahan Organised Crime Group. The Irishman has a $5million (£4m) bounty in the United States, while connected associates are also believed to be subjects of rewards.

The Dublin native was named as being a head of the Irish Kinahan crime gang and hit with worldwide financial sanctions by the United States government back in April. And a number of notable names in the boxing world that were connected with MTK Global, who once had Kinahan involvement, have been denied entry to America.

Most recently, Tyson was said to be blocked from travelling last week, and his dad John appeared to confirm that the story was true in a deleted Instagram video today. If the champion boxer is blocked from going to America, both he and his father would both be serving bans, albeit for completely unrelated incidents.

And that he won't be able to have his father or brother in his corner may have cost Love Island star and 8-0 professional boxer Tommy yet another date with social media sensation Paul. The pair were supposed to fight in December, but the younger Fury broke a rib in training and was forced out.

Now, his father John has claimed that he could yet again be unable to fulfil a planned fight date with Paul, who is 5-0 and has knocked out all four of his opponents. Tommy has been training with his dad and brother since his win over Daniel Bocianski in April at Wembley Stadium, and has been touted as Paul's opponent for his August 6 ring return at Madison Square Garden.

The Love Island star managed to fight without his dad or brother in his corner during his last trip to America, when he defeated Anthony Taylor back in August. Jorge Capetillo ran the corner for his four-rounder with Taylor on the undercard of Paul's first fight with Tyron Woodley.

"Listen, mate, we want this fight with you," Fury Sr told Paul in the clip, which later appeared again online, directed at the Ohio native. "There's one problem, we can't travel – Tommy hasn't got a team.

"His team members are not allowed in America at the present point of time, so Madison Square Garden ain't accessible for us, is it? And you know that. We want this fight with you, Jake, because we know that we can beat you.

"So what we'll do is we'll take less money and we'll fight you anywhere else in the world because we can't travel. Tommy is not going to start getting new teams in four weeks and different things and other strange people involved because that doesn't work. We're his people, we're his guidance, especially me and you're talking to me now."

Tommy Fury and Jake Paul's fight may be off yet again
(

Fury Sr went on in the video, which was hastily removed from social media as well as a number of re-uploads, to say that the fight can either happen on August 6 elsewhere in the world, or in America at a later date.

John Fury is banned from America due to his previous convictions. He also wasn't officially a part of Tommy's corner for his last outing in the UK due to not being correctly licensed, but he did unofficially run the corner from his ringside seat.

The fight between Fury and Paul had never been officially confirmed, although he was the frontrunner for the social media star's August 6 ring return. The American has already announced that he will fight at Madison Square Garden on that date, but no opponent has been named as yet.

Mirror Fighting have reached out to Jake Paul's representatives for comment.