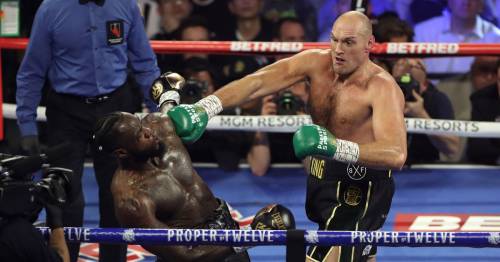 Tyson Fury has told Anthony Joshua to focus on his own clash with Oleksandr Usyk after predicting his rival will lose to Deontay Wilder.

The lineal heavyweight champion will make his ring return in a trilogy bout with Wilder next month.

And Joshua has predicted it could be tough for Fury, and hinted that Wilder could knock the 33-year-old out.

But Fury has now clapped back, raising doubts over Joshua defeating Usyk and called for focus on tomorrow night.

"I think he's got more on his plate rather than thinking about what I’m gonna do in my fight," Fury told Boxing Scene. "He's got to win his own fight. I'm not convinced that he's gonna win either.

Tyson Fury is preparing for a trilogy bout against Deontay Wilder
(

“I expect AJ to come out trying to box a bit more because of this new way he boxes now and uses his jab, and he knows he doesn’t have the stamina to take a fight to somebody under sustained pressure, and keep that up, because he gasses after about three rounds.

"And then he needs to take three or four rounds off. So, he wouldn’t be able to do that against Usyk because Usyk will be on him all the time, making him fight. So, I expect it to be awkward, maybe a bit of a chess match for a few rounds.

"And I expect AJ to run out of ideas, really. If he doesn’t land on him early and get him out of there with big punches, then I see it being a tough night for AJ and maybe even a stoppage loss.”

Fury was set to face his domestic rival this year in a huge undisputed clash, with the contracts signed for the fight to take place in Saudi Arabia.

But he was forced by an arbitration ruling to instead re-visit his rivalry with the 'Bronze Bomber' after his emphatic victory last year.

Will Fury face Joshua next year? Let us know your thoughts in the comments section below.

And the 33-year-old could be "disappointed" if Joshua was to be defeated by Usyk tomorrow night.

“If he lost on Saturday, I’d be pretty disappointed,” Fury continued. “But, you know, everything happens for a reason. And when one door shuts, another door opens. And we’ll see what goes on.

"You know, the heavyweight landscape is a crazy, old one, because as we’ve seen over the last 20 years or so, things happen. People lose, they come back, they lose again, whatever. It’s this crazy world.

"Anybody can beat anyone in heavyweight boxing because it’s the big guys and with one punch, it can be all over, as we’ve seen many, many times. So, with heavyweights, you can never put your house on it either way, unless you wanted to lose. Nothing’s ever a hundred percent.

And he has spoken out in anger amid the collapse of the fight, emphasising that he was "never" optimistic that the fight would happen.

He has also placed blame on Joshua's promoter Eddie Hearn, who he has claimed prevented the fighters from facing-off for ten years.