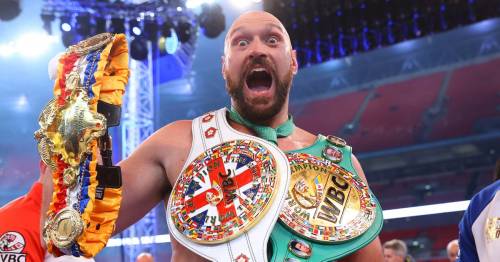 Tyson Fury has promised to announce "jaw-dropping" news as he faces a decision over whether to vacate his world title and head into retirement.

The 'Gypsy King' defended his title with a sixth-round stoppage victory over Dillian Whyte at Wembley last month, before confirming his plans to retire. Fury must now notify the WBC whether he plans to vacate his title without exploring a shot at the undisputed crown later this year.

And speaking in a video on his Instagram story, Fury said: "Hi guys it's the Gypsy King here. I have got some absolutely fantastic, amazing, jaw-dropping news coming soon so stay tuned."

Despite announcing his retirement, Fury is open to a crossover fight with UFC champion Francis Ngannou. And several people in the champion's close circle, including his wife Paris, believe Fury could be tempted out of retirement, if Anthony Joshua can set up a clash by beating Oleksandr Usyk later this year.

WBC president Mauricio Sulaiman has recently confirmed he will speak with Fury to establish his final decision. "The WBC will be communicating with Tyson Fury and his promoters about his future plans in the coming week," Sulaiman told Sky Sports. "We are ready to support him on whatever he decides. If he decides to retire the WBC will fully support him.

"It is our dream to see fighters retire with such greatness. Undefeated champion, financially protected with a loving family and a great future outside the ring. I am very happy and satisfied if this is his final decision and will fully support him and will be close to him for the rest of his life."

Do you think Tyson Fury will retire? Let us know in the comments section below

Tyson Fury could vacate his WBC heavyweight title if he retires
(

Fury could have the opportunity to become the first undisputed heavyweight champion since Lennox Lewis in 2000, if he opts to stay fighting for one final outing later in the year. He will likely be the favourite to complete his collection of titles and does not have the distraction of a mandatory challenger.

“There’s nothing for the WBC to assess. I don’t see any relevance because there’s no mandatory due, so what are they going to talk about? Why would they strip him? He’s got no mandatory due. The only time he gets stripped is if he doesn’t fulfil his mandatory and he’s just had one, that’s it."