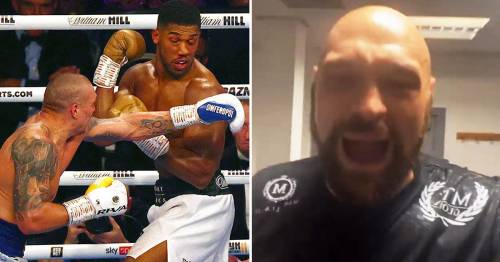 Tyson Fury has mocked his heavyweight rival Anthony Joshua for losing his belts to Oleksandr Usyk and letting them return to Ukraine.

Joshua suffered the second defeat of his heavyweight career losing his unified titles to Usyk in London after the Ukrainian's switch from cruiserweight.

Fury took the belts away from Ukrainian control after producing a scintillating display to unify the division against Wladimir Klitschko back in 2015.

He has been quick to mock Joshua over his loss again in a video on Instagram: "You know what I can't believe, that AJ has has gone and given Ukraine all the heavyweight belts back after all my hard work in stealing them. You big useless dosser.

"You let a little man come up from middleweight and set about you and take all your belts. Now it is going to take a real British Lancaster Bomber like me to go and bring the belts back to Britain!

Joshua and Fury were set to meet in a mega-money undisputed clash worth over £100 million before Fury was ordered to face Deontay Wilder in a trilogy bout.

Fury was planning to stage an undisputed tilt with his domestic rival Joshua after his trilogy against Wilder if the pair won their respective bouts.

But Joshua had already lost the belts a month prior to the third meeting and has set about making an immediate revenge plan by activating the rematch clause in the contract.

The 'Gypsy King' then tried to offer 'AJ' a step-aside deal to face Usyk in an undisputed tilt but he would have demanded the winner.

This would have made it an impossible task to negotiate with WBC mandatory challenger Dillian Whyte having been ordered to face Fury.

Purse bids have currently been delayed for the title defence against Whyte with Fury set to pursue alternative options if negotiations are left unresolved in the coming days.

Who would win if the pair fought – Tyson Fury or Oleksandr Usyk? Let us know in the comments section below

After fighting just once in 2021, the WBC champion is planning a much more active and has threatened to sack his promoters if a March return is not secured.

However, Fury's promoter Bob Arum is uncertain that any British bust-up with Whyte will be secured by March and has touted Andy Ruiz and Robert Helenius as potential opponents.

"Frank Warren and I are looking for another opponent to do Fury's fight in Manchester or Las Vegas, depending on who the opponent is," he told iFL TV.

"So we're looking at Andy Ruiz as a possibility, he's available. This big Finnish kid, who looked very good on the Fury vs Wilder 3 card, Helenius.

"Those are the two principal guys. I guess if it's Helenius we do it in the UK and if it was Ruiz, we do the fight in Las Vegas.

"Fury has endured himself so much to the American fanbase, this Christmas I was up in Aspen and everyone was talking about Tyson Fury and what a character is."