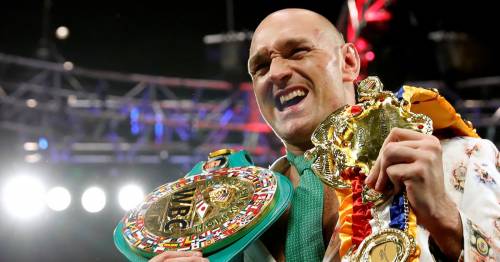 Tyson Fury has made close to $1million after selling an NFT of his world heavyweight titles – and is set to surpass that total as more of his collection sells.

The Gypsy King was supposed to face Deontay Wilder this weekend in his first heavyweight title defence, but the bout was postponed when there was an outbreak in his camp.

And despite losing out on that Las Vegas fight night, Fury still made a huge sum, selling an NFT with new coin distributor HoDooi.

He released the 'Lineal by Tyson Fury ' Non-Fungible Token (NFT), which sold for $987,000, and is still in the process of selling five 'open edition' tokens that will likely take the tally over the million.

"Huge thanks to all of the bidders, buyers, and the platform, HoDooi.com, for this NFT drop," Fury said in a press release following the sale.

"It was great working with the HoDooi team and I'm happy we are all a part of history with one of the highest bids on a single sporting NFT!"

And Matt Luczynski, CEO added that the NFT launch had broken records, very shortly after the launch of the distributor HoDooi.com.

"We are delighted to have been able to break records with Tyson's NFT launch," Luczynski said.

"HoDooi.com has only just begun its journey and we have a lot more in store for our users and for the crypto space!

"The HOD token will give our users the most exclusive access moving forward."

Fury was supposed to fight Anthony Joshua on August 14, but ended up losing out on the massive $50m payday when a judge ordered that he owed Deontay Wilder a third fight.

And now he has to wait until October 9 to face Wilder after a coronavirus outbreak in his camp, which will almost certainly move the eventual Joshua bout to 2022.

Joshua is, in the meantime, taking on pound-for-pound great and former undisputed cruiserweight champion Oleksandr Usyk at Tottenham Hotspur Stadium on September 25.

Joshua is ready to defend his crown and make another successful step closer to becoming undisputed world champion, but insists the focus of business will be on the immediate task at hand.

And two weeks later, Fury will finally step into the ring for his trilogy with Deontay Wilder at the T-Mobile Arena in Las Vegas.

He drew with Wilder in their first bout at the Staples Center in late 2018, but many experts felt that the Brit was robbed of a victory despite being dropped twice.

And he didn't allow the judges to get involved during their rematch last year, when he brutally stopped Wilder in the seventh round of their contest at the MGM Grand Garden Arena in Las Vegas.