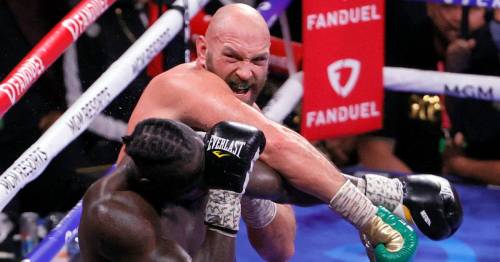 Tyson Fury believes he has ended Deontay Wilder's boxing career after brutally knocking him out in their trilogy fight last weekend.

Fury dropped Wilder three times on the way to a vicious KO victory to put a definitive end to their years-long rivalry at the T-Mobile Arena in Las Vegas.

And he has said that he expects Wilder to hang up his gloves after the fight, which was his second consecutive loss after going 43 fights without one in his professional career.

"I'm sure he'll have a lot of excuses to make," Fury told Behind The Gloves after the bout.

"He always does, he's a sore loser and he has Everlast MX on and I had Paffen Sports on, the gloves were the same.

"His trainers were in the changing rooms yet again, they checked everything, there's no queries. He got beat fair and square and that's all she wrote for Deontay Wilder.

"And I'll be surprised if he ever boxes again."

Fury's plan is to take some time off from boxing for the next few weeks as he looks to settle back in to home life in Morecambe after returning yesterday.

He will be ordered by the World Boxing Council to fight Dillian Whyte should Whyte beat Otto Wallin on October 30, with an undisputed fight against Oleksandr Usyk impossible due to his rematch clause with Anthony Joshua.

And promoter Frank Warren has said that there is a chance Fury could retire after cementing his legacy with his two wins and a draw with Wilder.

"Usyk at the moment, it's no secret, he's got a rematch clause with AJ," Warren told talkSPORT.

"So if AJ wants to step aside then I'm quite sure we could easily make that fight.

"So will he step aside? I doubt it. Or maybe he will, I don't know. But from our perspective, yeah we'd love to do that.

"If we can't and Tyson wants to continue boxing, then he'll have to defend his title.

Wilder was knocked down three times in the fight
(

Should Deontay Wilder fight again after being stopped once again by Tyson Fury? Let us know in the comments section!

"If he doesn't want to continue boxing then so be it, whatever he chooses to do. He's the guy getting in the ring, that's up to him."

Fury outlined his five-fight plan before facing Wilder, including facing the likes of Anthony Joshua and Derek Chisora before retiring from the ring.

But that plan was put in jeopardy when Joshua lost his world title belts to Usyk last month.

He will be ordered to fight Whyte, which could take place in the UK, and would have to be co-promoted by Eddie Hearn and Matchroom Boxing.

Hearn has said that Fury vs Whyte would be a "huge event" and he'd like to see it take place in the UK, given Fury's last five fights have all taken place in the US.