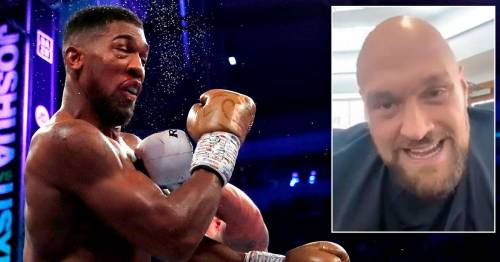 Tyson Fury thinks Anthony Joshua 's complacency will come round to haunt him again in his rematch with Oleksandr Usyk.

Joshua looks to win back his heavyweight titles against Usyk after losing out to the former undisputed cruiserweight champion in their first meeting last September. The rematch, which is being marketed as 'Rage on the Red Sea', has been officially announced to take place on August 20 at the Jeddah Super Dome in Saudi Arabia.

WBC heavyweight champion Fury believes his longtime rival Joshua lost to Usyk because he is too happy finishing second place. 'The Gypsy King' believes Usyk's boxing is too good for Joshua and the Brit will come up short again in August.

"I just think that Usyk's too good of a boxer for AJ and I don't think AJ has got the ability to pressurise him for 12 rounds, drag him into a dog fight and knock him out," Fury told Gareth A Davies on his Youtube Show.

Can Anthony Joshua win back his heavyweight titles against Oleksandr Usyk? Let us know your thoughts in the comments section below

Joshua was encouraged to find a new coach after his gameplan to outbox Usyk failed in their first clash. 'AJ' has since parted ways with longtime trainer Robert McCracken to link up with Robert Garcia for the rematch, but Fury thinks this will only make Joshua more beatable.

"In heavyweight boxing it only takes one punch. It wasn't a complete landslide last time, Usyk had a lot of marks on his face he was cut up. He's not hard to hit Usyk, he's right there in front of you so obviously Joshua can land a big punch on him," Fury added.

"I just think Usyk's too cute for him, too smart, too quick and a southpaw. I think with Robert Garcia trying to train him to go on the front-foot and be aggressive will only enable Usyk to land more often. I just don't see it but then again, what do I know.

"Anyone can win a fight as we've seen many many times. It's a good time to beat Usyk now because he's been at war for however long, if ever he was going to be off his ball now is the time."