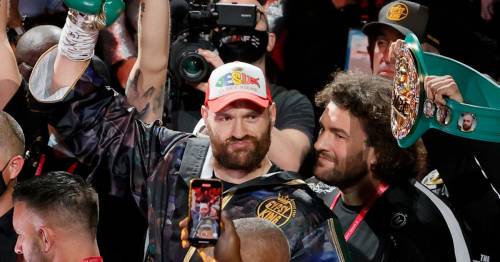 Tyson Fury and his wife Paris could be granted an audience with the Pope after his emphatic win against Deontay Wilder.

Fury is on top of the boxing world after stopping Wilder in their third and likely final fight last weekend in Las Vegas.

The Brit survived two knockdowns to floor Wilder in the 11th and defend his WBC in one of the greatest heavyweight title fights of recent years.

Fury is a devout Christian and was raised under strict Traveller rules, not sleeping in the same bed as his wife until they were married.

And Fury's promoter Bob Arum revealed how World Boxing Council president Mauricio Sulaiman plans to arrange an audience for Fury with the pope.

Arum told iFL TV : "Mauricio said to me was he's a great admirer of Tyson Fury. Also Mauricio showed me pictures, he's apparently a friend of the pope."

"He's gonna arrange for Tyson and his wife Paris to have an audience with the pope. That is essentially what I talked about with Mauricio. That would be a great honour and I know Tyson would revel in that."

Fury put a definitive end to his rivalry with Wilder, but the American seemingly rejected Fury's courtesy after the fight.

Wilder has been labelled a sore loser for his actions, but Arum thinks critics should give him a pass given the courage he displayed in the ring.

"It's not good but again, you and I haven't been beaten up and concussed I think the way Wilder was that night. So maybe I think the charitable thing would be to give him a pass," he said of the situation.

"I went over to him like I always do to go over the losing corner, tell him they fought a great fight. He wouldn't even look at me. When Tyson went over he articulated something stupid like 'I have no respect for you'.

What were your thoughts on Fury's stoppage win against Wilder? Let us know in the comments section below

"But again, look what he had been through and what he had suffered. I think it would be appropriate for all of us to give Wilder a pass for what he said and how he acted after the fight."

Fury will likely face mandatory WBC challenger Dillian Whyte in December if Whyte can get past Otto Wallin later this month.

And Arum said he won't speak with Fury about his next fight for several weeks.

"I haven't talked to him about that but I called him today. He'd been back in Manchester for a few hours, so we had a nice conversation," he continued.

"But I have learned after an event like that, you don't talk to the fighter about what's next for at least a couple of weeks. Let him relax, let him enjoy, then we'll figure out what's best for him."