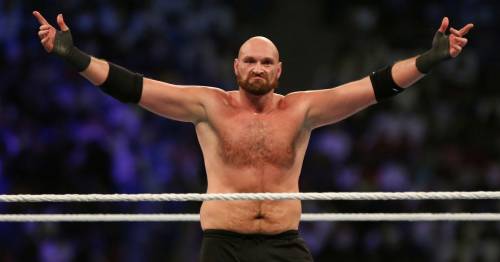 Former WWE champion Drew McIntyre has reiterated his calls for a "battle of Britain" with Tyson Fury.

Fury is expected to face Dillian Whyte in his next world heavyweight title defence, but talks have stalled after the WBC declined to order the bout last week.

And in the meantime, he has once again been called out by Scottish WWE star McIntyre, with whom he has shared a war of words for the past few years.

Speaking with Mirror Fighting at an event to launch WWE's latest three-year partnership with Special Olympics, McIntyre said that he is hoping to have a pay-per-view bout in the wrestling ring with Fury, ideally in the UK.

"The way I put it, I'm angling for a significant UK pay-per-view," McIntyre said.

"I won't shut up about it until it happens and Fury and I have been going back-and-forth for a long time.

"If we needed something a little outside the box to get people's attention, especially in the UK, someone of his stature in boxing and my stature in WWE that would draw some eyes.

Tyson Fury made his WWE debut in 2019, and has vowed to return
(

"It would be a battle of Britain and that's what I'd like to see."

And WWE's Chief Brand Officer Stephanie McMahon confirmed that the promotion still has interest in working with Fury, following his wrestling debut in 2019.

He was seen earlier this year at a pay-per-view taping while training for his trilogy bout with Deontay Wilder, and has consistently stated his desire to return to the wrestling ring.

Fury faced Braun Strowman on Halloween 2019 in Saudi Arabia while he was out of boxing following a cut suffered in his win over Otto Wallin that summer.

"Tyson Fury, I feel, is made for WWE," McMahon told Mirror Fighting . "He has all of the personality, all of the charisma, he's an incredible athlete with a tremendous look, he's a big man, lots of strength, power, speed and agility.

"I think he is tailor-made for WWE and we'll see if and when he comes back."

Back in April, Fury's feud with McIntyre, whose real name is Drew Galloway, saw the boxer make an outlandish call-out to the Scot, threatening to "smash" the two-time WWE champion.

"This is a special message to my long-haired boyfriend Drew McIntyre, who can’t stop thinking about me and can’t stop talking about me," Fury said in a post to social media.

Would you like to see Tyson Fury return to WWE to face Drew McIntyre? Let us know your thoughts in the comments section!

"Drew, if you want a good hiding I’ll give it you too, any time, any place, anywhere Drew, I’m in Las Vegas at the moment.

"Any time, I’ll smash you like I smashed your buddy Braun Strowman, but you’ll go down even quicker because you’re a lot smaller.

"I’ll grab you by the hair, smash your face on the floor and it’s all over Drew.

"Let me know when you want a piece of The Furious One."

Fury's upcoming bout with Whyte will likely take place before a return to wrestling, with the Brit guaranteeing over the weekend that he will fight in February.

He could face Joe Joyce if the Whyte bout falls through, although it is still expected that he will face Whyte, who has been mandatory challenger for the WBC belt for a number of years.

And should he opt to wait for the winner of Anthony Joshua and Oleksandr Usyk's rematch for the rest of the heavyweight titles, he could find himself with time to dedicate to wrestling.