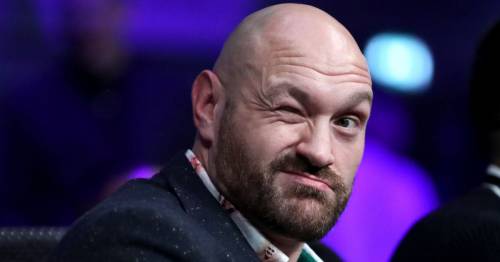 Tyson Fury has fired back at Dillian Whyte's claim he was avoiding a domestic showdown by branding the mandatory challenge an "easy fight".

The 'Gypsy King' is expected to be ordered to face Whyte in a WBC mandatory defence in the coming weeks after a ruling was delayed due to an ongoing legal battle.

Whyte has accused his domestic rival of trying to avoid a showdown which he has been waiting for since becoming 'silver' champion in 2017.

But Fury has responded by dismissing his fellow countryman's claims.

"I thought I was going to be fighting Dillian Whyte," Fury told IFL TV. "I don’t know what he’s doing in his private life with the WBC.

"Kinda s***** because I know how long arbitrations go on for. I hope I don’t have to fight somebody else like a voluntary or whatever.

"They’re all only workouts to me, I’ll destroy every man that comes in front of me… I’m due an easy fight anyway, he [Dillian Whyte] would have been ideal really.

"Heavy bag on legs is what I’m after to be honest. He’d have been the ideal candidate.”

Whyte withdrew from his scheduled clash with Otto Wallin after he suffered a shoulder injury during his training camp.

And he immediately revealed his planned pursuit of a long-awaited world title shot with Fury, who he has developed a rivalry with since initially earning the No.1 contender status with the WBC.

But his mandatory challenge is yet to be confirmed as he awaits the end of an arbitration between himself and the organisation, in relation to a previous complaint disputing the clash between Fury and Anthony Joshua.

Fury is keen to return to the ring in February as part of his activity plan which could line up an undisputed showdown against the winner of Joshua's rematch with Oleksandr Usyk.

Who wins if the pair meet next year- Tyson Fury or Dillian Whyte? Let us know your prediction in the comments section below.

But Whyte has been fearful that Fury could retire after hinting at hanging up his gloves in the aftermath of his victory over Deontay Wilder.

And he has made a bold stoppage prediction if he can get the chance to meet Fury in the ring next year.

"It's already been confirmed that Tyson Fury has to fight me next," Whyte told Sky Sports. "They announced it on their website that I'm the mandatory challenger and I'm Tyson Fury's next fight.

"Obviously he says he's a fighting man and a man of his word, but we all know he talks a lot of s***, so let's see.

"He said he was going to fight me after he beat Wilder, then he ran away. Let's see what he does.

"Of course I'll finish him. Wilder is overrated. He can punch, but he can't fight. He's very athletic and rangy, and he's got good speed, so when he closes the distance quick and he lands a punch, he's heavy-handed.