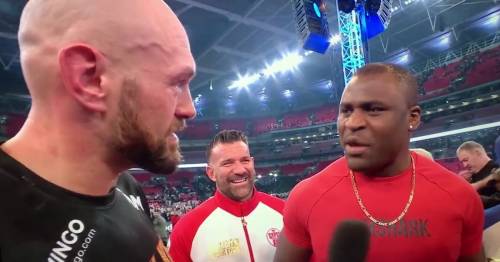 Tyson Fury 's retirement claims may be genuine, but that wouldn't stop him from making a hybrid-rules fight with UFC champion Francis Ngannou, according to Chael Sonnen.

The world heavyweight champion boxer continues to insist that there is nothing shy of an unattainable £500million payday that could get him back to professional fighting. But UFC legend Sonnen has noted in a recent podcast that he could maintain that promise and still compete against Ngannou, who is MMA's top heavyweight.

Fury and Ngannou have long expressed interest in a crossover fight and have floated the idea of a bout with MMA-style gloves, perhaps in a cage and using general boxing rules. Such an event would have to be an exhibition of sorts and wouldn't land on either of their records in MMA or boxing.

Sonnen believes it's the perfect way for Fury to utilise his strict training regime, which includes two sessions a day, and satisfy his competitive edge. Ngannou is currently waiting out his UFC contract and recovering from knee surgery, but would be available towards the end of January if such an event were to take place.

"When Tyson Fury comes out and tells you that, I think there's more truth to it than with anybody else," Sonnen said of the boxer's retirement. "It's greatly relevant that we do identify what that's about.

"Does that include the sport that you're in the process of making up the rules to for the 'whatever you want to call it' contest against Francis? Does that also carry to Francis?

"He made some kind of a deal with Francis, they met each other, they did a face-off, they've shaken hands at some point on something. Tyson is well aware of what Francis is having to do to move heaven and earth to make this opportunity there."

Sonnen is referring to Ngannou's complicated contractual situation with the UFC. He has been pushing for a new contract with a significant pay rise and a clause that would allow him to box at least once, ideally against Fury in what would be a mega-money contest.

Would you like to see Tyson Fury fight Francis Ngannou? Let us know your thoughts in the comments section below!

Fury and Dillian Whyte split a £31million purse 80/20 for their world title bout at Wembley Stadium in April. In contrast, Ngannou's last defence of his belt at the sold-out Kia Forum in Inglewood, California against Ciryl Gane saw the pair split a sum in the region of £1million.

The Cameroonian is risking his UFC future by engaging with Fury, as well as other promoters. His contract was automatically extended when he beat Gane to retain the belt, but he will be allowed to leave in January, around the same time as he will have recovered from injury.

"Tyson’s not going to pull the rug out on Francis," Sonnen continued. "They have some kind of an agreement, that I fully expect that Tyson would honour.