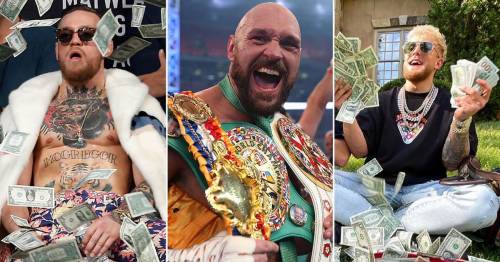 Tyson Fury has ranked above fellow fighters Conor McGregor and Jake Paul in this year's list of the world's highest-paid athletes.

That's according to a recent list of the top 100 highest-paid athletes released by Sportico, which had heavyweight champion Fury at No.14. Canelo Alvarez is the only fighter to be ranked above 'The Gypsy King' in the list, as he earned $89million for the year.

Fury's rank comes after he earned over $18million for his first heavyweight title defence against Deontay Wilder last October. That payday likely increased significantly after the Brit also earned a share of the 600,000 pay-per-view sales.

Last month, Fury knocked out Dillian Whyte and subsequently announced his retirement from boxing. If Fury is serious about calling it quits, he went out on a considerable payday after pocketing over $30million for his brutal knockout of 'The Bodysnatcher'.

Do you think Tyson Fury will fight again? Let us know in the comments section below

Pay-per-view sales for Fury vs Whyte haven't been officially released yet. Sportico have Fury earning $63million in winnings and $6million in endorsements for the past year, taking his total up to a massive $69million.

UFC star McGregor, who topped last year's list, has only fought once in the past year. The former two-weight champion broke his leg against Dustin Poirier in their trilogy last July, but earned a guaranteed $20million payday for the fight.

McGregor was ranked at No.22 on the list and made an additional $12million in earnings for the year. That likely came from his fight with Poirier selling a reported 1.8 million pay-per-view buys, the second most in promotional history.

McGregor also earned $20million in endorsements for the past year, likely from his shares in TIDL Sport spray and Proper 12 whiskey. McGregor sold to his majority stake of the whiskey brand to Proximo Spirits last year, but still owns part of the label.

Conor Mcgregor was No.1 on last year's highest-paid athlete list
(

YouTube star turned boxer Paul was ranked No.45 after earning $30million in winnings for his respective fights. 'The Problem Child' was guaranteed a $2million purse when he partnered with Showtime to face ex-UFC welterweight champion Tyron Woodley last August.

He was also given a percentage of the reported 500,000 pay-per-view sales, meaning his payday likely crept into the eight figure mark for the fight.

For his rematch with Woodley four months later, Paul was guaranteed a similar amount to their first fight but likely made less overall after the fight struggled to sell on pay-per-view.