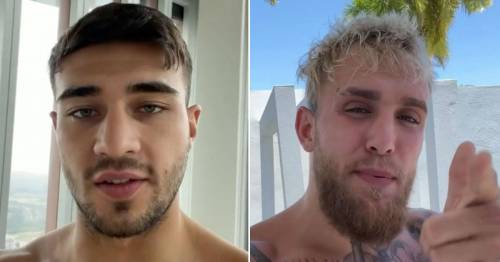 The British star, 23, was set to meet Paul, 25, in the ring last year but was forced to withdraw from their planned bout in December with a broken rib and chest infection. The duo have since been in talks for several weeks after Paul announced his ring return for August 6 without a confirmed opponent.

On Wednesday, Paul issued an ultimatum to Fury on social media, tweeting: "Tommy Fury, you pulled out last year. Then you agree to fight me now but your dad is trying to pull you out again? We’ve given you everything you asked for. $2 million purse. VADA testing. Tampons. You have 24 hours to clear this up or I will never give you this opportunity again."

Fury later confirmed he plans to accept Paul's $2million (£1.6m) purse offer and has now announced he has signed the fight contract. During an Instagram video, he said: “Just to let you all know, the fight on August 6 is going ahead.

Fury had accused Paul on social media of only accepting VADA drug testing for the fight after a threat of the contest being shelved altogether. Fresh doubts emerged on Wednesday over the fight's status after Fury's father, John, confirmed neither he nor heavyweight champion Tyson would be able to travel to New York to attend.

Fury previously fought Anthony Taylor on the undercard of Paul's first victory without his father John and brother Tyson present. In response, Paul hit out at his rival in a lengthy video and accused him of dragging his feet over the uncertain fight deal. He then made an offer to fight without his coach to make up for Fury being without his team in the United States.

Who will win the grudge match: Tommy Fury or Jake Paul? Have your say in the comments!

“What’s the excuse?," Paul said during a video rant on Twitter. "‘Oh I can’t come and I can’t do it because my dad can’t be there with me during the fight.' Tommy, your dad has been banned from the United States for 15 years. You’ve known this the whole entire time. He’s a criminal. He’s not allowed in.

"When you fought Anthony Taylor in Cleveland, neither Tyson or your dad were there with you in your US debut. I will agree to not have my team around me during the fight week. I will agree to not fight with my coaches in my corner. We can both fight solo just like Devin Haney was going to do against George Kambosos. This is what real boxers do."

An announcement appears imminent with both fighters expected to come face-to-face during a press conference to announce the event in New York next week.