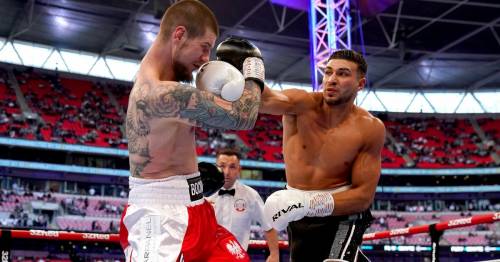 Jake Paul has been told that he will be "permanently shut up" after he takes a major step up to face Tommy Fury.

The YouTuber-turned-boxer has become one of the most polarising and divisive fighters in combat sports since turning professional in 2020. He's 5-0 since his debut, having knocked out all four of his opponents, but has been often criticised for facing non-boxers, with none of his opponents having had a boxing match before facing him.

So he will face a massive jump in competition when he faces the 8-0 Fury, who is the younger brother of world heavyweight champion Tyson. The pair have had a long-running rivalry dating back to the start of last year, and after their December date was cancelled, they have rescheduled for August 6 in New York.

“The Paul brothers’ boxing charade is about to come to an end once and for all,” Fury said in a press release ahead of the fight, also mocking Jake's older brother Logan. “I am a boxer. My opponent plays boxing.

" Jake Paul has been dressed up to look like a boxer against retirees from other sports. On August 6, I will show the world that he does not belong in the ring.

"Thank you to my promoter Frank Warren, Most Valuable Promotions and Showtime for letting me permanently shut up Jake Paul. I look forward to headlining Madison Square Garden and knocking out this clown.”

Fury has 4 knockouts on his eight-fight record, and most recently dominated Polish fighter Daniel Bocianski, who was 10-1 when the pair met at Wembley Stadium. He rose to fame on ITV's reality show Love Island, but was already a professional when he entered the villa, and has insisted he is a legitimate fighter.

And that is one of the unique selling points of the bout for Paul, who is often told to fight a 'real boxer' by fans online. He ended up fighting Tyron Woodley, the former UFC welterweight champion, on that December date last year, landing a star-making viral knockout but ultimately stuttering at the box office having just gone the distance with the same opponent the previous August.

Who do you think wins; Jake Paul or Tommy Fury? Let us know your thoughts in the comments section below!

“I wasn’t sure I was going to say yes to another potential matchup against Tommy after he pulled out of our matchup last year,” Paul explained. “But ultimately, knocking out a Fury was too appealing to pass up.

"I’ve proven I am dedicated to boxing in and out of the ring, from promoting fights, championing fighters and fighter pay, to knocking out my opponents. The Furys cannot say the same, they are selfish tossers.

"On August 6, at 'the mecca'; Madison Square Garden, the world will see why I am on my way to being a world champion. I’m honored to fight under the same lights as some of the greatest professional boxers in history.”