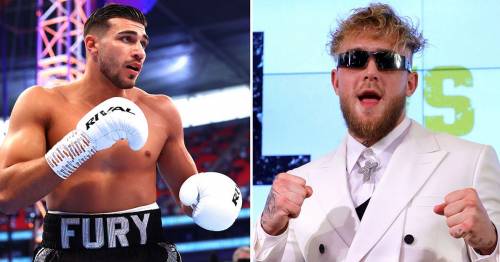 Tommy Fury has claimed that Jake Paul only accepted drug testing to prevent further delays to their planned August meeting.

Fury was forced to withdraw from his planned December meeting with Paul last year after suffering a broken rib and chest infection. Now the pair have been in renewed talks over a fresh showdown with Fury today agreeing to Paul's $2 million offer to stage a clash on August 6.

In the build-up to the previous planned event, Fury's father John accused Paul of refusing to sign up to voluntary drug testing. Now Fury has made a fresh claim while agreeing to a bout, writing on Twitter : "The fight is on. August 6th. Forget a team or any other bull****. I don’t need anybody to help me lay you flat on that canvas. Oh and thanks for finally signing the drug testing. You only agreed to it when you realised the fight was at risk – who needs who?"

Paul is yet to respond to the fresh accusation but hit out at Fury in a scathing video rant accusing him of dragging his feet over signing a new fight deal. He also claimed that VADA testing was included as part of the fresh fight conditions alongside a guaranteed $2 million fight purse for his rival.

The YouTube star has previously dismissed allegations he had elected not to drug test, claiming that Fury's camp made up a rumour to tarnish the build-up to the fight. "It's people making stuff up," Paul said of accusations that he refused to be tested for the bout. "John Fury spent 11 years in prison [he was sentenced to 11 years, serving four before being released], he's a delusional old guy.

"He just made a rumour up and everyone believes everything they read on the internet every day which is sad because people don't actually look into it. But the smart ones who did look into it saw 'oh wait there is drug testing for this fight'. The Florida State Athletic Commission is drug testing Jake and Tommy multiple times and so there was never a denial on my end of doing any sort of drug test."

Do you think Tommy Fury will beat Jake Paul? Let us know in the comments section below

Any new bout will likely take place at Madison Square Garden on August 6 with Fury now verbally agreeing to the fight date and financial offer. Fury Sr previously claimed his son had been tested on multiple occasions throughout the preparation stages of their planned meeting but questioned whether Fury's rival received the same scrutiny.

“In the contract with Jake Paul, which had everything in it but the kitchen sink, he refused point blank to sign up with the drug-testing people VADA," Fury said in a lengthy Instagram video. To me, that’s very naughty because we’re meant to be in a very high-profile fight. We’re doing it, we’ve always done it. You can test a Fury every day of the week and 10 times on a Sunday – Tommy’s got nothing to hide. Can I say the same about Jake Paul?"

Previous : Urgent warning to all parents of babies as new sleep guidelines published
Next : Six dead after helicopter crashes into mountain and bursts into flames