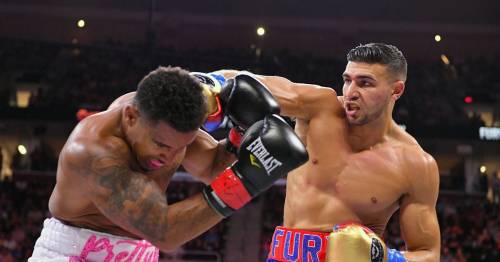 Tommy Fury was deliberately "terrible" when he outpointed Anthony Taylor to secure his fight with Jake Paul, according to his brother Tyson.

The young British star will fight under the brightest spotlight of his career when he faces Paul on a bumper pay-per-view card in Florida on December 18.

But he faced criticism after delivering a below-par display to outpoint Taylor on the undercard of Paul's clash with Woodley in August.

Fury's brother Tyson is certain that Fury will not need to step up his level of performance to defeat Paul and can beat him with "a broken hand".

"No," Fury replied when asked by Queensberry Promotions if Tommy would have secured his shot at Paul by stopping Taylor.

"Tommy looked terrible on purpose so he could get this fight, that is what clever people do.

"Tommy could have his worst night ever and still beat Jake Paul. He could probably turn up with broken ribs, a broken left hand, two left feet, his clothes on back to front and a flue and he would still beat him.

"That is how confident I am that he can beat Jake Paul."

Fury began his feud with Paul after his clash with Taylor was set up as a preparation bout for Fury to challenge Paul later in the year.

Although the 22-year-old failed to impress many on the night, he confronted the YouTube star after his split-decision victory over Woodley which led to them being separated by security.

Negotiations continuted despite Paul's planned rematch with Woodley and a fight was agreed with the pair continuing to argue on social media.

Now Fury will look to secure the biggest scalp of his career after fighting limited opposition during his seven-fight career.

What did you make of Tommy Fury's performance against Anthony Taylor? Let us know your verdict in the comments section below

He conceded himself that his last outing was an under-par performance, but spoke with the exact same confidence as his brother Tyson in predicting the outcome of his fight with Paul.

"It wasn't my best performance but at the end of the day if it was easy everyone would be doing it," he said after his victory.

"I'm learning day by day and I'm getting better. There was no danger at all, tonight went the way it went because it's in God's hands.

"Looking at that, Jake Paul should have an easy night so there are no excuses now. You've seen everybody in here, I got the biggest cheer of the night. No excuses, no running, no hiding. I want you next you bum!

Paul himself has limited experience with opponents Ben Askren and Woodley the only ones with prior fighting experience on his professional resume.

The pressure is expected to be on Fury however due to his natural background in boxing, in addition to having his brother Tyson training him and operating his corne r.