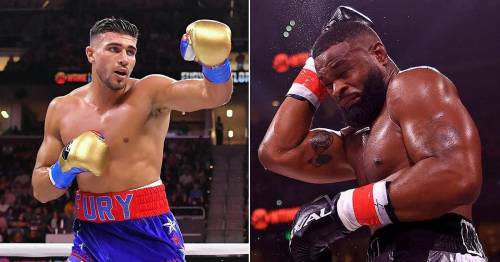 Tommy Fury has been advised to face former UFC champion Tyron Woodley in order to set up a rescheduled showdown with Jake Paul.

Fury was set to meet YouTube star Paul in the ring in December last year but was forced to withdraw with a broken rib and chest infection.

Woodley instead stepped in to face Paul in a rematch but suffered a brutal KO defeat in the sixth round.

Paul has shown little interest in rescheduling his fight with Fury and UFC legend Chael Sonnen believes Fury must first show he is able to "handle himself" against Woodley.

"You wanna know a fight that would work throw Tommy Fury in there with Tyron Woodley," Sonnen said on his YouTube channel.

"You wanna know a match that would work, you put them in there that could even be a co main-event on some card. But you can add the caveat that Jake will be on the front row.

Tommy Fury was set to face Jake Paul before he withdrew
(

"If Tommy can show that he can handle himself with Tyron, then Tommy will belong in there with Jake afterwards. The problem with doing that is that Tommy can't beat Tyron Woodley.

"Tommy has a very strong last name but the boxing community does not accept him as one of theirs. They will bury this fight within the press and will not even give these guys the opportunity."

Fury has admitted he was "devastated" by his recent pull-out of the fight with Paul and immediately unveiled his plans to reschedule the bout this year.

Him and his family including brother Tyson and father John were extremely confident of ending the feud between the pair in the ring.

Who would win if the pair fought – Tommy Fury or Tyron Woodley? Let us know in the comments section below

However this now looks increasingly unlikely with Paul unwilling to commit to any rescheduled date while he takes a brief break from the sport on holiday.

Paul is also assessing other options including boxing star Julio Cesar Chavez Jr who he has made a public offer to fight in a bid to meet a 'natural boxer'.

Now the YouTube star's trainer BJ Flores has conceded that Fury is not in Paul's plans but they would like to see him in another pay-per-view clash too.

"Yeah he fumbled, I don't even think Tommy Fury is in Jake's mind right now," Flores told The Schmo. "We all thought at the time that we would be surprised if this fight comes off.

"Even after the contracts were signed and even after Tommy was talking we were working so hard for a gameplan for Tommy and when they said two weeks before we weren't surprised.

"It's the worst feeling in the world so I don't think Tommy is in Jake's mind at all right now, Tommy should go and do his own pay-per-view so we can see the numbers analyse them and go from there."