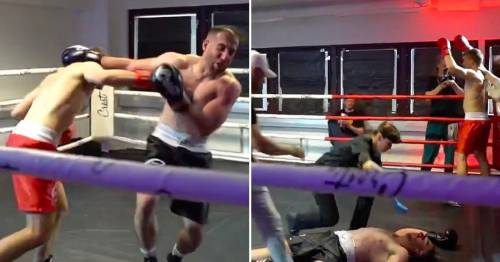 TikTok star Khaled Azizi was left flat out on his back after being knocked out cold by YouTube star Daniel Aloha.

The pair were fighting on a content creator event in Finland hosted by fellow TikToker TurunPug. It brought together some of the leading innovators in the space from the country, and featured three bouts including two boxing fights and a muay-thai clash.

Azizi was competing in the final showdown of the night against rival Aloha, who was looking for an opening, with the pair duelling in front of a small crowd. Aloha came in to close the distance to Azizi who was also looking to be more aggressive.

Aloha landed a jab with Azizi tempting to fire back but was shown swinging wildly and completely missing an attempt at landing a power punch. The YouTube star then landed a sensational right hand which left Azizi crumpled on the canvas. The thundering shot landed flush on the chin of Azizi who was left knocked out completely cold.

Azizi was quickly tended to by medics having been shown flat on his back and motionless, while his rival celebrated the victory. The small crowd at the venue were surprisingly raucous and audibly cheered while gasping in awe as the TikTok star fell to a brutal defeat.

TurunPug, who host the card in Finland, burst on to the scene having blown up his own car and going viral on content streaming service Twitch. He opted to set up an obscure boxing event and become the latest content creator to show that less experienced fighters are able to put on a show in the ring.

What do you make of the latest content creator event? Let us know in the comments section below

The number of social media stars competing in boxing has continued to rise with YouTube creators Jake Paul and KSI leading the way by launching professional careers in the sport. Several Twitch streamers were present on last month's 'Creator Clash' card which was staged by popular YouTuber iDubbbz.

iDubbbz opted to make the event with all proceeds donated to charity which helped out attract a sold out crowd to the Florida venue. However he was outpointed on the card by fellow content creator Dr Mike in the night's main event which attracted huge interest. 41-year-old content creator Dad also shot to fame after knocking out much younger opponent Matt Watson in the first round, with streamers JustaMinx and I Did A Thing picking up victories on the night.

Previous : Floyd Mayweather claims he earns $300million every month despite Jake Paul jibe
Next : Jake Paul will put $300,000 belt on the line against rival Tommy Fury