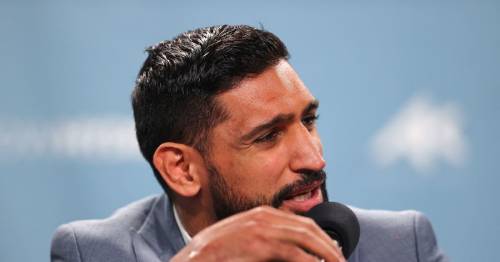 Three men have been charged over the gunpoint robbery of former boxing world champion Amir Khan on Leyton High Road in April.

The Metropolitan Police said Ahmed Bana, 25, Nurul Amin, 24, and Dante Campbell, 20, will appear at Thames Magistrates' Court on Thursday. Bana, of Hale Gardens, north London, has been charged with conspiracy to commit robbery and possession of an imitation firearm whilst committing a schedule 1 offence.

Khan was just yards ahead of his wife, Faryal, outside the Sahara Grill in Leyton when two men confronted him. They demanded he hand over his watch, a diamond-encrusted Franck Muller Vanguard Chronograph, worth £72,000.

Earlier that day, Khan had been pictured with a fan with his watch on display. He also wore the timepiece, studded with 719 diamonds, at a charity event at the Grosvenor House Hotel the previous evening, raising fears he was specifically targeted.

Amir Khan was robbed at gunpoint in East London in April
(

Just hours after the incident, Khan, 35, took to Instagram to assure his followers he was safe, posting: "Last night was a bit mad. I'm glad everyone is safe. It feels a bit weird not wearing a watch but it is what it is.

"I just wanted to tell you guys that I'm all good. Me and the wife are doing some TV work today." On Twitter., he wrote: "Two men ran to me, he asked for my watch whilst having a gun pointed in my face. The main thing is we're both safe."

The robbery came two months after Khan's final professional fight, an explosive bout with long-term rival Kell Brook in Manchester. Almost 20 years after the pair met as amateurs it was Brook, 36, who prevailed with a sixth round stoppage.

Weeks later, Khan confirmed he would be retiring from the sport. He also ruled out the prospect of turning his hand to coaching or training.

“I don't have the patience to be a trainer," he told The DAZN Boxing Show, before confirming that he wants to be a manager and promoter. "I’m hopefully going to announce something in the next couple of weeks."

The loss to Brook meant Khan finished with a professional record of 34-6, to go with the Olympic silver medal he won in Athens in 2004. During his career, he held unified light-welterweight world championships between 2009 and 2012.

Previous : Man and woman charged with plotting to bring child to UK to harvest organs
Next : Nate Diaz responds to Dana White suggesting he will allow Jake Paul fight