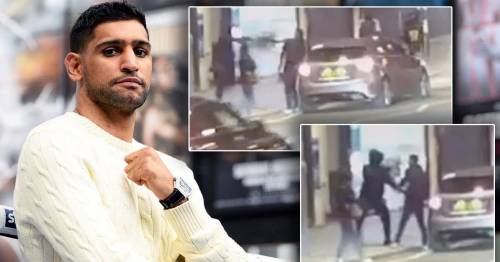 Three men have been arrested after boxer Amir Khan was robbed at gunpoint and had a £72,000 watch stolen in East London in April.

Khan was just a few steps ahead of his wife, Faryal, outside the Sahara Grill in Leyton when two men walked up to him and demanded he hand over his diamond-encrusted Franck Muller Vanguard Chronograph. He was then helped by brave restaurant staff.

"The three men – A, 25, B, 34 and C, 20 – were arrested on suspicion of robbery after warrants were executed by detectives this morning .

"All three remain in custody."

Khan had been pictured with a fan earlier in the day with his watch on display. He also wore the timepiece, studded with 719 diamonds, at a charity event at the Grosvenor House Hotel the previous evening raising fears he may have been specifically targeted.

Hours after the attack, he shared a video on social media and told fans on Instagram : "Last night was a bit mad. I'm glad everyone is safe. It feels a bit weird not wearing a watch but it is what it is.

"I just wanted to tell you guys that I'm all good. Me and the wife are doing some TV work today."

Amir Khan was out in London with his wife, Faryal, when the incident occured
(

"Two men ran to me, he asked for my watch whilst having a gun pointed in my face," he said on Twitter. "The main thing is we're both safe."

Police said at the time they launched an investigation after the mugging at 9.15pm on April 18.

"The victim, a man aged 30s, was approached by two males who threatened him with a gun before stealing his watch and fleeing," a spokesperson said at the time.

"No shots were fired and nobody was injured."