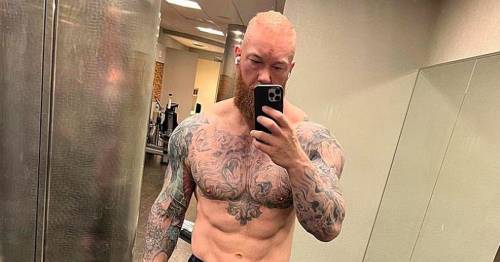 Former World's Strongest Man Thor Bjornsson is at his lightest weight since the age of 10 as he continues to trim down before his boxing fight with Eddie Hall.

The strongman rivals will finally step into the ring together in March, with an official date of their fight expected to be announced in the coming weeks.

Bjornsson and Hall were scheduled to fight last September in Florida, but Hall suffered a bicep tear in training and was forced to pull out of the fight.

And the Icelandic fighter – who once weighed over 200kg – revealed he has shed off a massive 60kg since starting his boxing journey.

Thor Bjornsson has trimmed down for his fight with Eddie Hall
(

"Shape has improved and endurance has improved drastically in this prep. Plus my body has no aches or pains," he said on Instagram.

"My body weight is 145kg which is the lightest I’ve been since the age of ten."

The 33-year-old is training in Scotland under the guidance of his coach Billy Nelson ahead of his fight with Hall.

Bjornsson has competed in three bouts to date, going the distance with professional boxers Steven Ward and Simon Vallily before his win against Larratt.

Hall is yet to compete in any sort of exhibition fight and faces a big weight cut if he is to match Bjornsson's weight, reaching 163kg over the Christmas period.

The Brit claimed to have a " spy " in Bjornsson's training camp last year and was unimpressed after watching footage of his rival sparring.

Who will come out on top when Bjornsson and Hall fight? Let us know your thoughts in the comments section below

And Bjornsson recently predicted he will put away his strongman rival in the early rounds of their fight.

"I think I'll knock him out in the third or fourth round," Bjornsson said to iFL TV about his fight with Hall.

"I'm just focused on me, focused on getting as good as possible, and people can make predictions on how they're going to win fights.

"But at the end of the day when you're in the ring things can change very fast and you have to be quick to adjust even though you have a game plan because it might not work.

"I'm putting in a lot of time, a lot of effort, a lot of work and sometimes you don't really see it yourself but I can definitely feel and see it slowly but surely coming together."

Previous : Queen ‘anxious’ as she prepares for Prince Harry’s ‘most shocking claim yet’, says expert
Next : Francis Ngannou told he would need three-year training camp for Tyson Fury fight