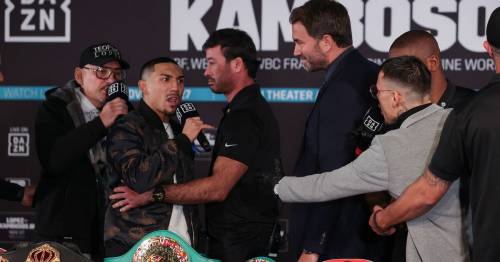 Teofimo Lopez spent over $250,000 on camp for George Kambosos fight

Unified lightweight world champion Teofimo Lopez claims he spent more than a $250,000 to prepare for his bout with George Kambosos Jr.

The pair have been scheduled to fight since February when Kambosos was ordered as mandatory challenger for Lopez's first title defence since beating Vasily Lomachenko in October of last year.

But after a number of delays from their initial June date, including the bout moving from Triller to Eddie Hearn's Matchroom Boxing, the fight has taken the majority of this year to come to fruition.

And Lopez says that he has spent a massive chunk of his more than $3million purse on his camp.

"I spent a couple of thousand to make sure I took a test every day after I got Covid," Lopez told Mirror Fighting . "It took a whole month to finally get a negative test back.

"This camp? It's cost me about a quarter of a million dollars.

"We spend a lot of money doing what we do but it's my body so for me that's an investment, even though a lot of people don't see that."

Teofimo Lopez has claimed he spent over $250,000 on his latest training camp
(

Lopez claims that the amount he invests into his camps is the reason he doesn't wear flashy clothes or accessories.

He will earn a career-high purse of over $2.1million for his bout with Kambosos, as well as taking home $950,000 from Triller's deposit that was made prior to them defaulting on staging the fight.

"That's why I don't wear the jewellery," he continued. "The jewellery is being done in my body, rather than wearing diamonds.

"I spend that jewellery on my body, not that you don't want to be flashy, but yeah, I spent a quarter of a million on this camp."

The bout will take place at the Hulu Theatre in New York's Madison Square Garden, and despite the fact that all four governing bodies have belts on the line, it's not for the undisputed lightweight title.

Lopez insists he will be undisputed in the weight class should he win, but officially his rival Devin Haney is the WBC champion, while the New Yorker fights for the less recognised "franchise" title.

When Lomachenko was still champion of the division, he was elevated to "franchise" champion, which allowed Haney to be elevated from interim holder without a definitive title bout against the prior holder.

"This fight is for undisputed," Lopez insisted. "Did Devin Haney fight for his belt? No, back in the days, in boxing to become world champion you had to beat the guy, that is is a world champion.

"Devin Haney is not a world champion, Devin Haney is someone that is just holding something materially that is not an actual, true world title.

"This fight is undisputed, despite what any of them say."

Promoter Hearn, who also oversees Haney's career, disagrees with Lopez on what constitutes undisputed, claiming that a fight between the pair is needed to unify the division.

Would you like to see a fight between Teofimo Lopez and Devin Haney? Let us know in the comments section below!

Haney's win over Zaur Abdullaev, at the same venue as this weekend's fight, was initially supposed to be for the interim title, but when Lomachenko was elevated, Haney was made champion, causing many a dispute amongst the division's contenders.

"He should be the undisputed champion, but he's not." Hearn explained to Mirror Fighting of Lopez's situation.

"The other governing bodies do not recognise the WBC franchise as a belt that you can unify with.

"So, in essence, he should be undisputed because he beat Lomachenko, but factually he's not and Devin Haney has the actual WBC title.

"That's the belt that the other governing bodies will allow you to unify with.

"So if you ask [WBC President] Mauricio Sulaiman, he'd tell you Lopez is undisputed, but other governing bodies would say 'no he's not, we don't recognise him as the undisputed world champion because he's not the WBC world champion.

"I've got to back my man Devin Haney and if Teofimo was my fighter, I'd probably call him undisputed."