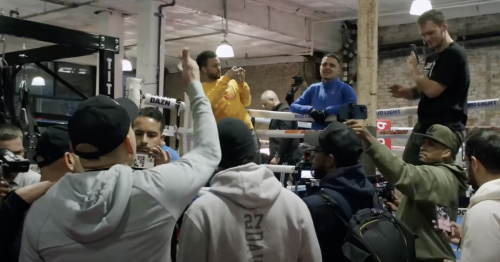 Teofimo Lopez removed from media workout after dad gets into altercation

Chaos ensued in New York City this evening as George Kambosos Jr and Teofimo Lopez’s dads got into it at a media workout for their world title bout on Saturday night.

Kambosos was in the ring for his workout when Lopez Sr began shouting at the fighter, leading to a brief fracas involving both fighter's fathers.

Lopez and his son, the unified world lightweight champion, were escorted out of the Church St Boxing Gym in Manhattan after the incident, in which the coach claims Kambosos Sr “put his hands” on him.

Speaking with Mirror Fighting immediately after the fracas, Lopez Sr insisted that Kambosos has made the altercation physical.

George Kambosos is raring and pumped
(

But Kambosos claims it was his father George Sr who stepped between the pair while he was trying to work out.

“He overstepped the line,” Kambosos told Mirror Fighting. “We’re here trying to do our thing like professionals.

“But Bozo the clown wants to come over and carry on like a big man, but little does he know my father is here and he’ll sort s*** out.

“He walked over to the corner and had a little cry, he talked a bit of ‘blah, blah, blah’, he should do something!”

Lopez and his team were quickly taken from the gym, where the pair were engaged in an open workout for the fight at Madison Square Garden on Saturday night.

Their fight date has been scheduled a number of times since new promoters Triller initially won the purse bid in February.

Lopez was diagnosed with Covid-19 during their June fight week, and when a new date couldn’t be agreed in October, the bout deferred to Matchroom Boxing who had made the second-highest bid.

Are you excited to see Teofimo Lopez return to the ring for the first time since winning the lightweight belts? Let us know in the comments section!

And it appears that the British promotion will get it staged at the first time of asking in the Hulu Theater this weekend.

“The purse bid was back in February, so it’s been a long time coming, around nine months, and it’s exciting.

“It’s a fight a lot of people are looking forward to, it means a lot to the lightweight division and some big fights come up for the winner.

“We moved quite quickly once we found out in early-mid October we moved to get it up and running.

“This is a huge fight and it’s been a long time coming.”

Kambosos is a mandatory challenger for Lopez’s IBF title, one of the four he won from Vasily Lomachenko in October 2020.

The New York native has insisted that he will move up to super lightweight and challenge undisputed champion Josh Taylor after fighting Kambosos this weekend.