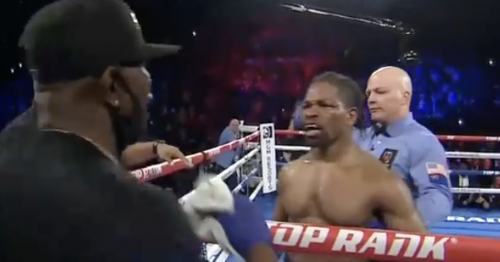 Shawn Porter's father claims his son did not prepare properly for his world title defeat by Terence Crawford.

The American challenger was stopped in the tenth round after twice being sent crashing to the canvas by the undefeated champion.

And this condemned the contender to his fourth career defeat, in addition to conceding the first stoppage loss of his resume in Las Vegas.

Porter's father Kenny pulled his son out after the second knockdown and said: "Honestly his preparation, he didn't prepare like I wanted him too. So that just makes me sad and I don't want him in that situation.

"He fought a great fighter who was razor sharp, but it was at a deficit. It is like fighting this guy blindfolded when you are at a deficit like that, so I stopped it before anything happened to him.

"When guys get to certain levels they believe they know what they are doing but don't necessarily take all of the information on board, so this is where we are at with it and I had to make the decision.

"I live across the street from him and I will be having breakfast with him in the morning, my kid cannot defend himself at that point in the fight and I had to make the decision to protect him."

Crawford rallied to a late stoppage victory in the fight after Porter's fast start from the opening bell initiated a frantic pace.

The champion then responded by switching up his stance in the middle rounds in a bid to outfox his opponent and find new angles of attack.

And his dominance showed in the ninth stanza where he controlled the round landing several successful combinations that really started to turn the dial.

Finally the breakthrough came in the tenth when he dropped his opponent to the canvas with a left hand before following up with a right hand to score a second knockdown.

Do you think Shawn Porter's father made the right decision to stop the fight? Let us know your thoughts in the comments section below

The welterweight contender later confirmed his retirement from the ring at a post-fight press conference.

"I won't become a gatekeeper. That's not the life I want to live," Porter said. "I'm 34 – now's the time. "I understand my dad. I took too many clean shots which isn't the Porter way."

And Porter's father responded : "I already knew this.

"He thought Errol Spence Jr would be his last fight. I'm his father, I knew that! I know things before they happen. This was something that was coming.

"I could see it in training, in his movement, how he looked at the clock like 'how long do I have to be here for?'"

Previous : Boxer tells referee “I’m ready to die” during fight before bout is stopped
Next : Give Your Loved One an Oyster I.O.U.: A Food-Themed Holiday Gift Guide